I’m going to state up front that this would be one of those great travel days, one of many we’ve experienced during a lifetime of visiting people and places.  Nothing extraordinary happened but it contained just the right mixture of walking, touristy activities, and of course, good food and drink to put it up there in rarefied company.

In the morning we sat down for the hotel’s breakfast service only to be disappointed; a large contingent of guests, likely staying there for a small conference, had overwhelmed the dining room staff and after waiting for much too long, we abandoned to instead head just down the block to La Reclette, part of a coffee house chain in the city. 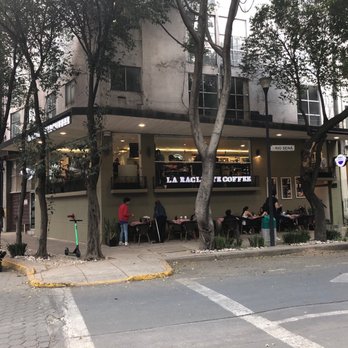 We enjoyed a decent latte, pastry, and a large cup of yoghurt with fruit, fortifying us for the day ahead.  From there we walked down to Insurgentes, our familiar metro stop and hopped aboard for the trip to our first stop of the day, the Frida Kahlo home and museum.  As usual the train was crowded, but one advantage of the Mexico City system is that the cars ride on rubber wheels, making for a fairly smooth ride compared to many of the transit systems we’ve encountered.

Rubber Tires on the Metro

By taking the metro we’d opted for a long walk from the station but preferred that to trying to manage the bus system.  When we arrived at the house, the line wrapped around the corner and halfway down the block.  We stood there for a bit monitoring progress, which wasn’t fast; I walked to the front of the house and noticed a separate line for pre-paid online tickets.  Inspiration struck and having access to the internet on our cell phone (thanks Verizon), we bought tickets for a 2pm entry.

Casa Azul with a Shorter Line

With time to kill, we flipped our intended schedule for the day and walked the six blocks needed to get us to the  Leon Trotsky Museum (Museo Trotsky), our other stop for the day.  After paying our admission fee (including a pass to take pictures) for 95 Pesos ($5.19), we entered the complex, and encountered a pictorial history of Leon Trotsky, an art gallery and the ever-present gift shop.  The center of the compound is the house where Trotsky and his second wife, Natalia Sedova, lived from April 1939 to August 1940, and where Trotsky was murdered. 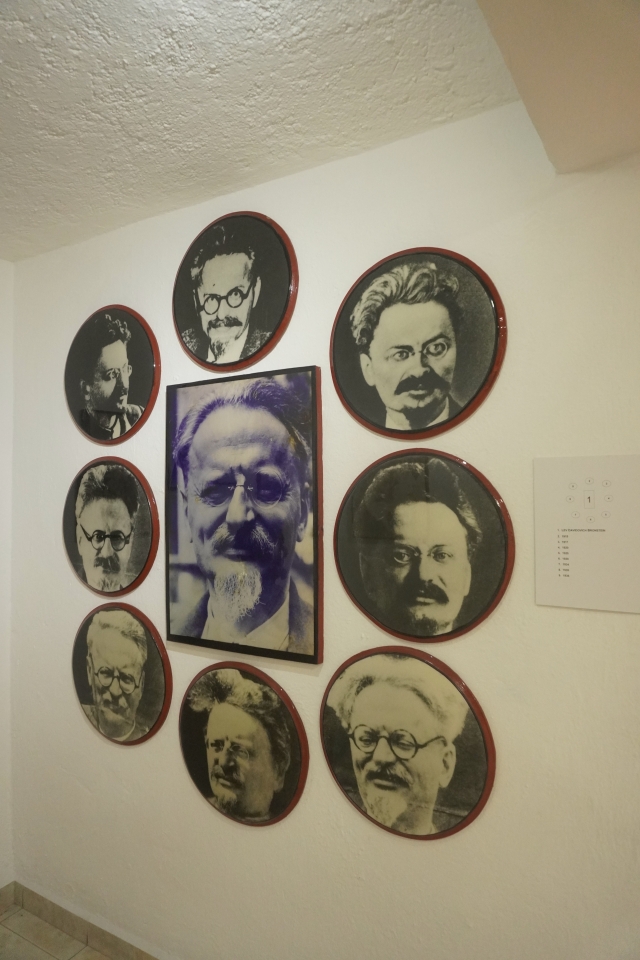 The Many Faces of Trotsky

Trotsky’s teenage grandson, Vsevolod Volkov (Seva) also lived at the house from August 1939 to August 1940, which has been kept as it was at that time, especially the study in which Ramón Mercader killed Trotsky with an ice axe to the back of the head. The complex was turned into the current museum and asylum institution in 1990, on the 50th anniversary of the assassination.

Exterior of the House

Trotsky, a Soviet revolutionary, Marxist theorist and politician whose particular strain of Marxist thought is known as Trotskyism, was forced into exile outside the Soviet Union in February 1929 because of his criticism of Joseph Stalin’s government.  For the next eight years, he and his wife, wandered among several countries (Turkey, Italy, France, and Norway) under surveillance, and later under a death sentence due to Trotsky’s persistent political activity against Stalin from exile. 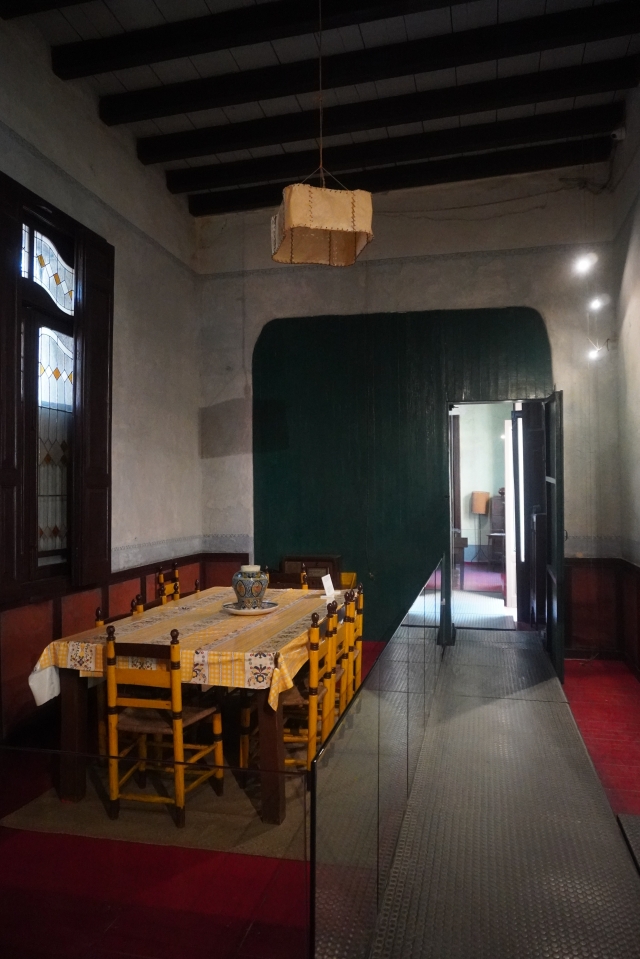 Diego Rivera and Frida Kahlo were successful in persuading the Lázaro Cárdenas government to give the Trotsky’s political asylum in Mexico and Trotsky and Sedova arrived in Mexico in January 1937.  From then to April 1939 the couple lived at Frida Kahlo’s family home called “La Casa Azul” (The Blue House).  However, by 1939, Diego Rivera and Leon Trotsky had a falling-out; some stories state that it was over ideology and Diego’s criticism of Trotsky’s writing and others state that Trotsky had had an affair with Frida, or a combination of both.

On May 24, 1940, a failed attempt on Trotsky’s life was led by NKVD agent Iosif Grigulevich and Mexican painter David Alfaro Siqueiros.  The group, disguised as police officers, managed to overpower guards, set up machine guns in the complex’s inner courtyard and began firing at the various rooms of the small house.  Those inside survived by hiding under bedroom furniture.  This attack prompted the building of the walls that surround the property and the building of guard towers, which gives the property a fortress-like appearance. 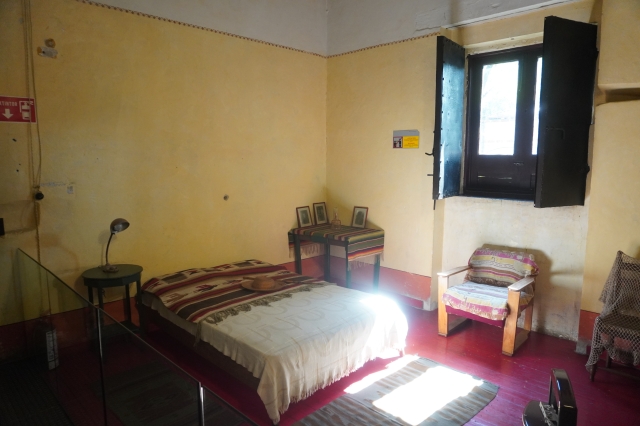 The next attempt on Trotsky’s life, on August 20, 1940, was successful.  A Spanish Stalin supporter by the name of Ramón Mercader, had become the lover of Trotsky’s personal secretary.  As such, he gained the household’s trust and was permitted on the premises.  On that day, Mercader asked Trotsky to look over something he had written, and as Trotsky read the work, Mercader removed an alpine climbing axe from his coat and struck Trotsky in the back of the skull.  The blow to Trotsky’s head was bungled and failed to kill him instantly, as Mercader had intended. View from the House To the Garden and Cafe

Witnesses stated that Trotsky spat on Mercader and began struggling fiercely with him, which resulted in Mercader’s hand being broken.  Hearing the commotion, Trotsky’s bodyguards burst into the room and nearly killed Mercader, but Trotsky stopped them, laboriously stating that the assassin should be made to answer questions.  Trotsky was taken to a hospital, operated on, and survived for more than a day before he died on 21 August 1940, as a result of loss of blood and shock.  The room in which Trotsky was killed remains exactly as it was at that moment, including the papers and the books in their exact positions. 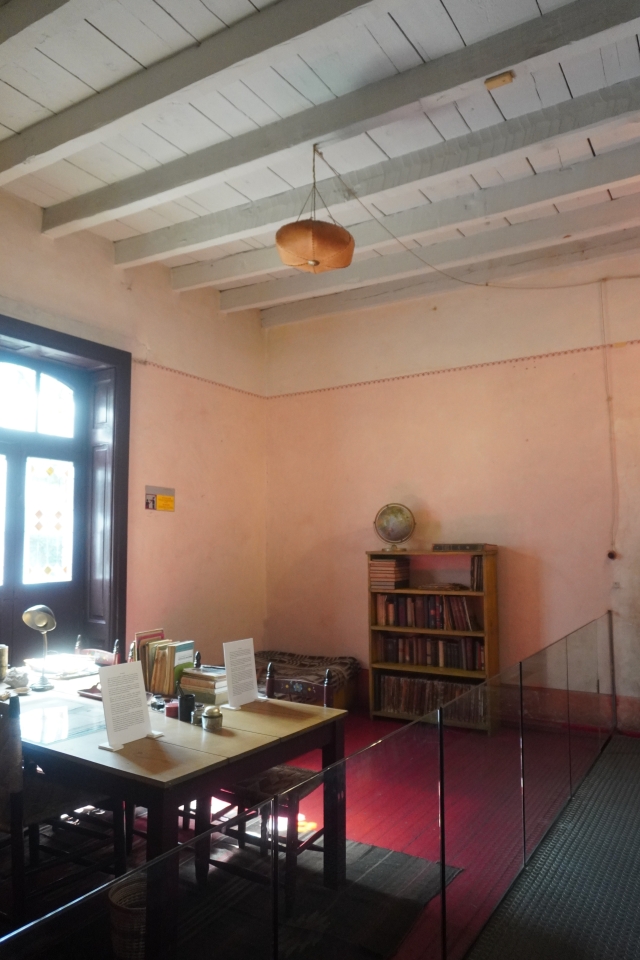 The rest of the complex space is taken up by the garden area, which is still maintained with tropical flowers and other plants, such as rare cacti, which Trotsky collected.  There are photos in the museum of Trotsky collecting cacti in the Mexican countryside and tending the garden along with the rabbits and chickens which were in the hutches and coops that still exist.

The center of the garden contains a stone stele designed by Juan O’Gorman, which contains Trotsky’s ashes along with those of his wife.  Above the stele is a flagpole with the Soviet flag.

We finished our self-guided tour and with time still to kill, had a snack at the small café located inside the grounds.  We ordered a couple of café con leche’s and split a cheese filled crepe topped with a mild salsa verde, enjoying the moment on the sunlit patio and talking about what we’d just seen, the long lasting impact of Stalin’s rise to power and its ultimate consequences.

Crepe as a Snack