Leaving the Trotsky house, we walked back over to Casa Azul, Frida Kahlo’s Museum and with still more time to kill, headed off in another direction in search of a Christmas market we’d heard might exist in the area.  We were on the hunt for a small angel for Sharon (aka Mrs. Griz) and perhaps a creche (nativity scene) for Ann and Rendy. Imagine our delight when two blocks later we stumbled upon a street lined on both sides with booths selling any manner of Christmas related merchandise.  We probably spent a good 30 minutes perusing the various offerings, eventually settling on just the right items, both nicely detailed yet small enough to fit in our luggage and best of all, reasonably priced. One of the Stalls

Back at Casa Azul with just a few minutes more to kill, we bought a bag of potato chips from a street vendor, nicely salted and with a trace of lime juice added for some zing and sat under a small tree to consume them in no time at all, a pleasant treat as I rarely eat chips but love them when I do. 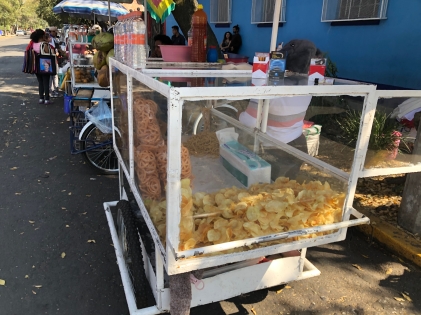 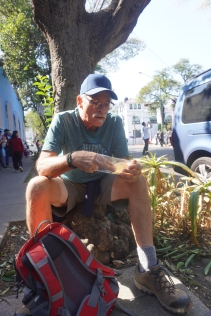 At the appointed time we crossed the street and entered our designated line, quickly gaining entry to the courtyard that forms part of the grounds containing the house.  Originally the house was the family home of Frida Kahlo, but since 1958 it has served as a museum dedicated to her life and work.  With about 25,000 visitors monthly, it is one of Mexico City’s most-visited museums and is supported solely by ticket sales and donations. The house was constructed in 1904 on lands that belonged to the former Hacienda del Carmen, a property of the Carmelites in the colonial period.  At that time and during the first half of the 20th century, the area was officially part of the Federal District of Mexico City, but was still relatively rural and separate from Mexico City’s urban sprawl. View of the Courtyard from the House

Frida was born in this house in 1907, and it remained her family home throughout her life. She spent her last thirteen years of it here as well.  It demonstrates the lifestyle of wealthy Mexican bohemian artists and intellectuals during the first half of the 20th century.  According to records and testimony, the house today looks much as it did in 1951, decorated with Mexican folk art, Kahlo’s personal art collection, a large collection of pre-Hispanic artifacts, traditional Mexican cookware, linens, personal mementos such as photographs, postcards and letters, and works by some artists of great renown. 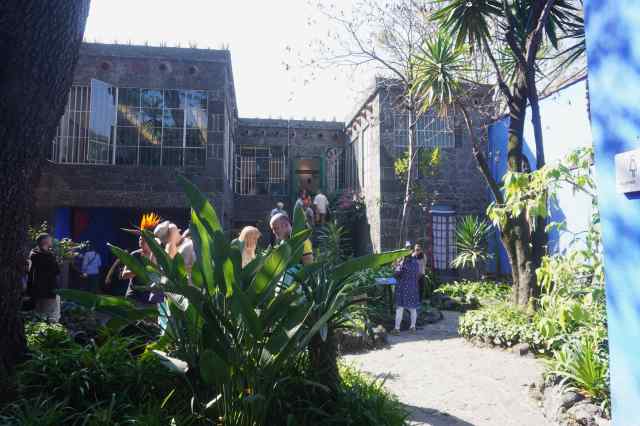 The house consists of ten rooms. On the ground floor is a room that contains some of Kahlo’s mostly minor works.  This room originally was the formal living room, where Frida and Diego entertained notable Mexican and international visitors and friends such as Sergei Eisenstein, Nelson Rockefeller, George Gershwin, caricaturist Miguel Covarrubias, and actresses Dolores del Río and María Félix. 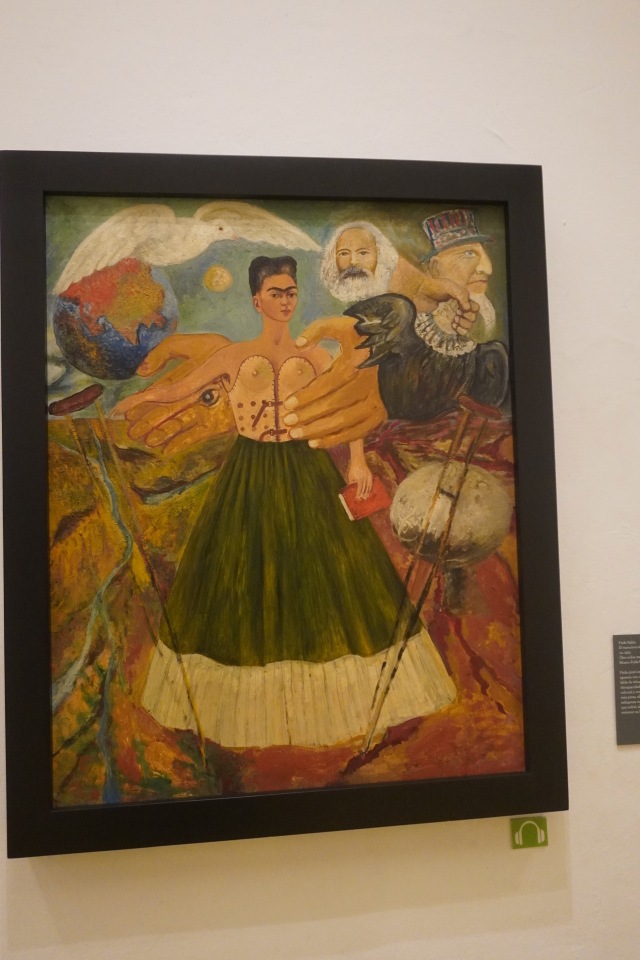 Self Portrait of Frida

The second and third rooms are dedicated to personal effects and mementos and to some of Rivera’s works, the second room filled with everyday items Frida used such as letters, photographs, and notes.  The fourth and fifth rooms contain contemporary paintings by artists such as Paul Klee, José María Velasco, Joaquín Clausel, Celia Calderón Orozco, and a sculpture by Mardonio Magaña. 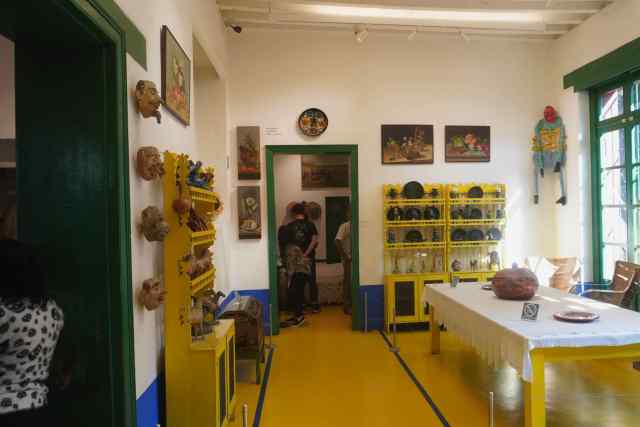 The sixth and seventh rooms are the kitchen and dining room. Both are in classic Mexican style, with bright yellow tile floors, blue and yellow tile counters and a long yellow table, where Frida’s sister Ruth stated that Frida spent much of her time.  Off the dining room was Rivera’s bedroom, with his hat, jacket, and work clothes still hanging from a wall rack. 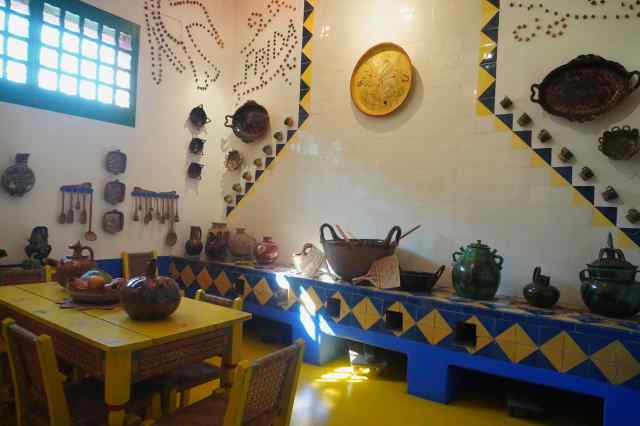 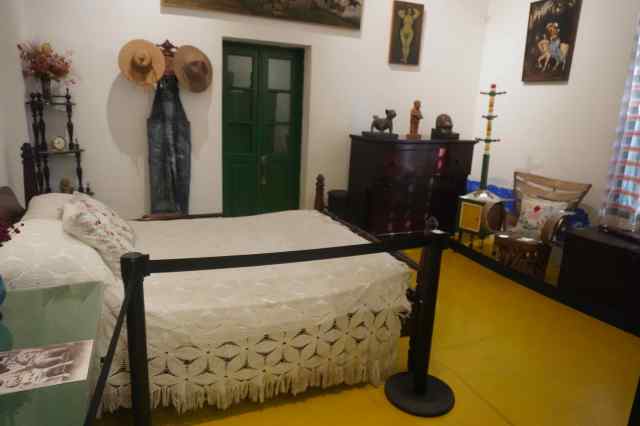 The two rooms of the upper floor which are open to the public contain Frida’s final bedroom and studio area with all of its original furniture. 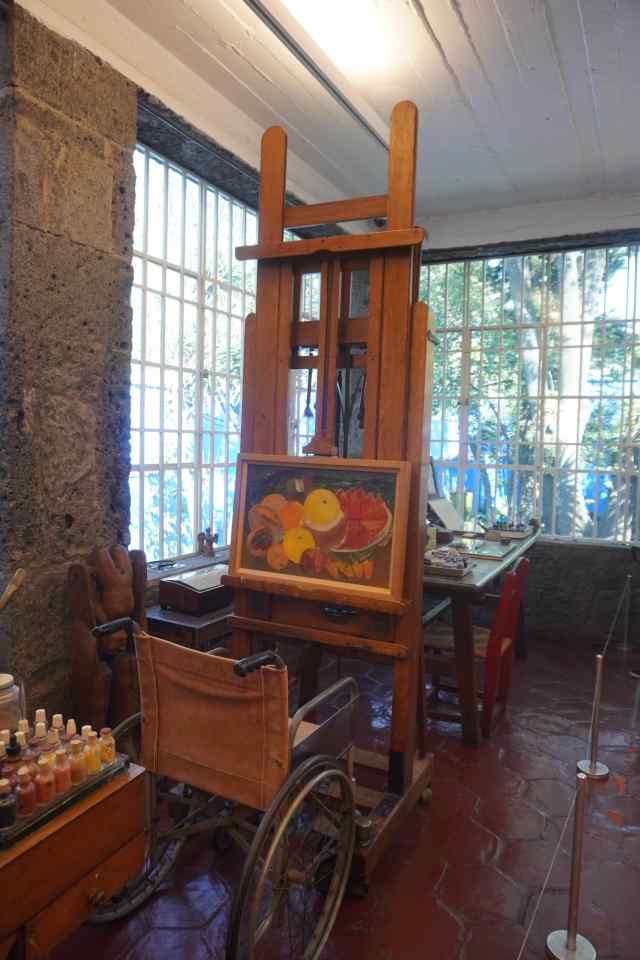 Frida’s Studio and One of Her Still Life’s

In one corner, her ashes are on display in an urn, which is surrounded by a funeral mask, some personal items, and mirrors on the ceiling. 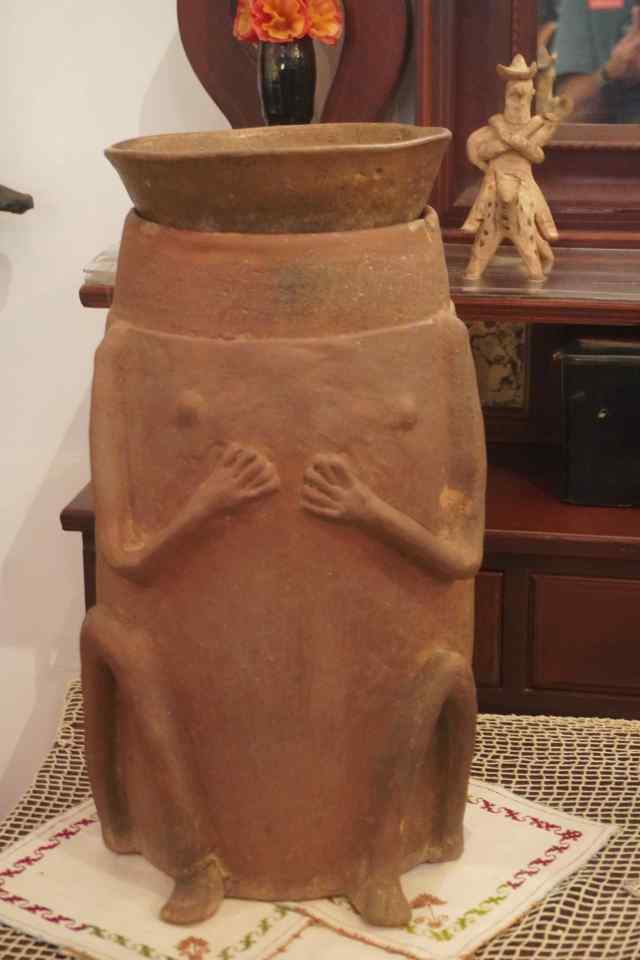 On her bed is a painted plaster corset she was forced to wear to support her damaged spine, and under the canopy is a mirror facing down which she used to paint her many self-portraits.  The head of the bed contains the painting of a dead child, and the foot contains a photo montage of Joseph Stalin, Vladimir Lenin, Karl Marx, Friedrich Engels, and Mao Zedong. 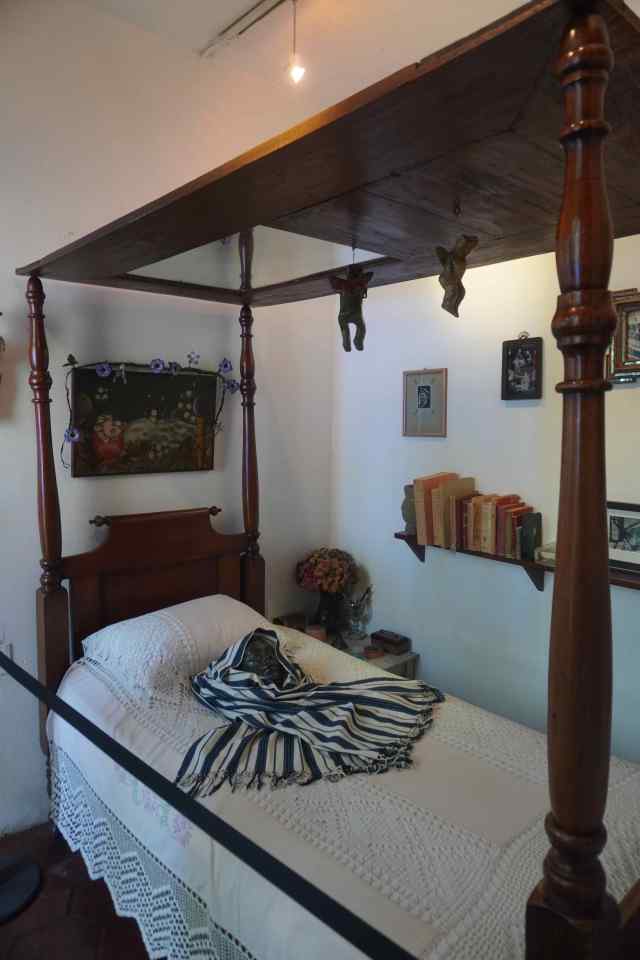 We completed our swing through the house and crossing the large courtyard, entered a building that housed a collection Frida’s dresses.  When she was six years old, she contracted polio, which made her right leg shorter and thinner than the left.  The illness forced her to be isolated from her peers for months, and she was bullied.  To further exacerbate her physical issues, in 1925, she and her boyfriend, Alejandro Gómez Arias, were on their way home from school when the wooden bus they were riding collided with a streetcar. 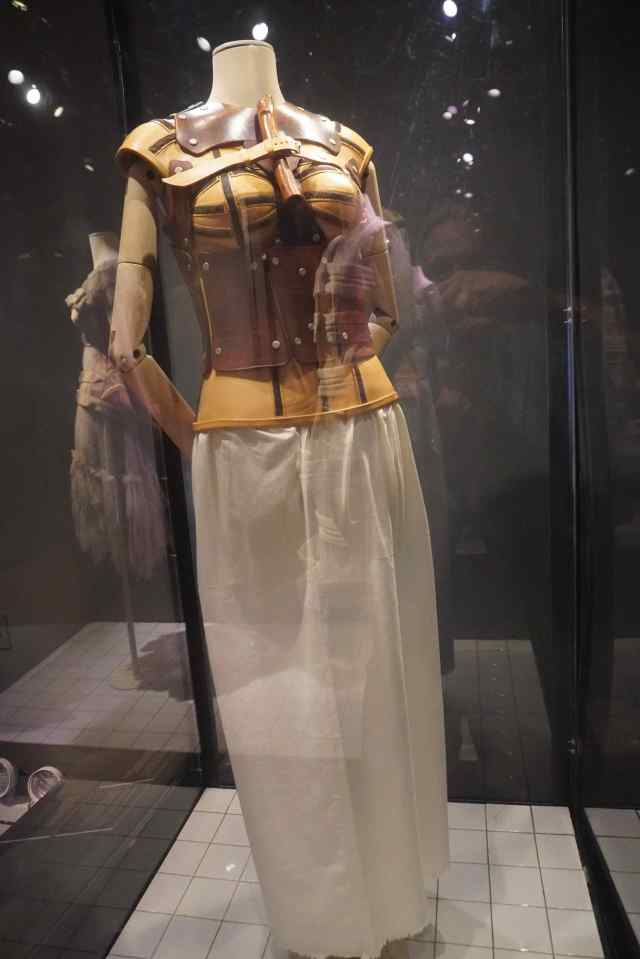 One of Her Corsets

The accident killed several people and fractured Kahlo’s ribs, both her legs and her collarbone.  An iron handrail impaled her through her pelvis, fracturing the pelvic bone. She spent a month in the hospital and two months recovering at home before being able to return to work.  As she continued to experience fatigue and back pain, her doctors ordered x-rays, which revealed that the accident had also displaced three vertebrae.  As treatment she had to wear a plaster corset which confined her to bed rest for the better part of three months. 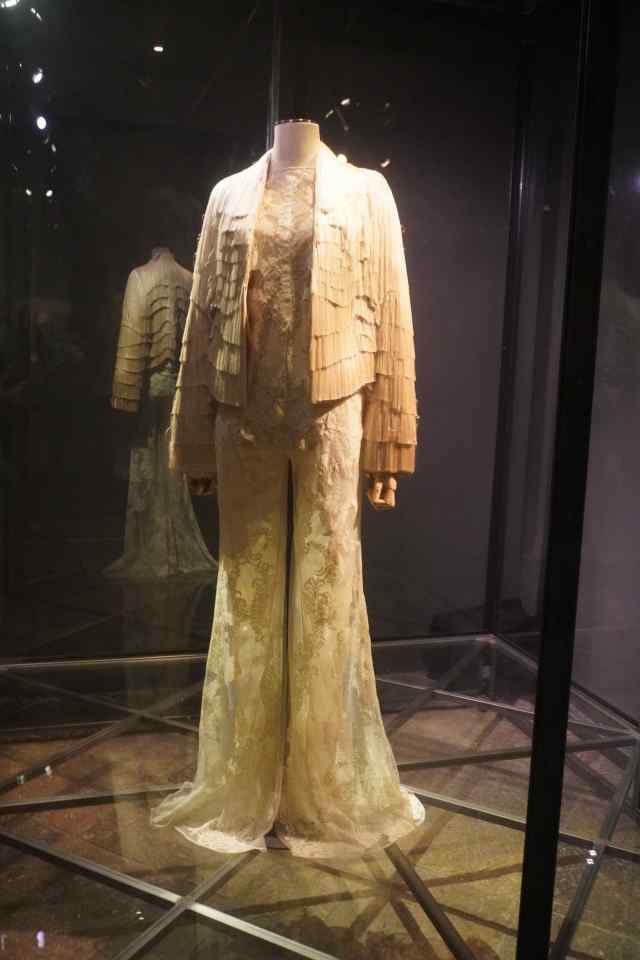 One of Her Dresses

The accident ended Kahlo’s dreams of becoming a doctor and caused her pain and illness for the rest of her life; her friend Andrés Henestrosa stated that Kahlo “lived dying”.  In the early 1930’s, similar to many other Mexican women artists and intellectuals at the time, Kahlo began wearing traditional indigenous Mexican peasant clothing to emphasize her mestiza ancestry: long and colorful skirts, huipils and rebozos, elaborate headdresses and masses of jewelry. 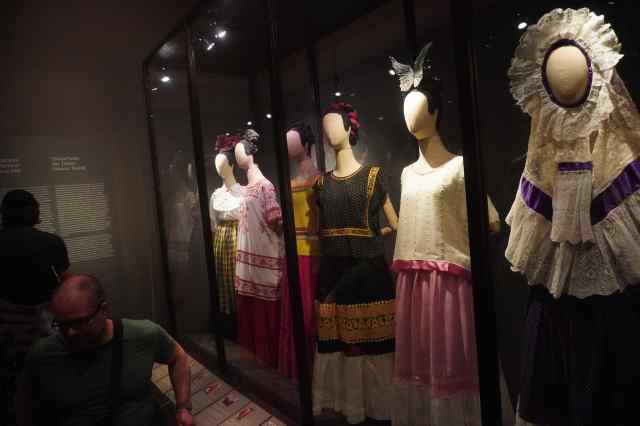 A Collection of Her Indigenous Dresses

Finishing up we stopped in at the gift shop to pick something up for one of Jessica’s co-workers and having concluded that transaction, began the long walk back to the Metro stop and our eventual return to the hotel.  We’ll finish up this day and the rest of our stay in the next, our last, post of our Mexico adventure. 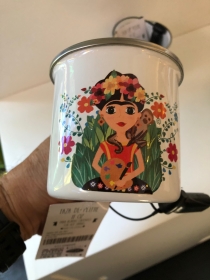 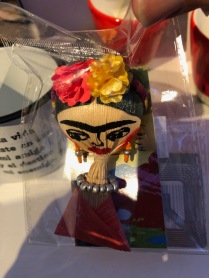 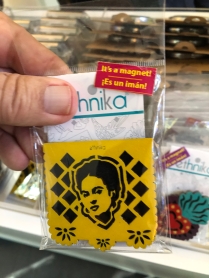 Which of these three did we select?