Our shopping stop was at Clark’s Market, which we’d checked out the day before after dinner.  We decided that for our meal that night we’d pick up some prepared dishes from the deli counter and eat in the apartment.  This is a big attractive supermarket, kind of a cross between Whole Foods and the upscale versions of other chains (Pavilions, Gelsons, Whole Foods, etc.).  We were immediately attracted to two items side by side in the refrigerated case, a pan of Chili Relleno’s and one of chicken pot pies.

We got one of each accompanied by some broccoli salad and a slice of tiramisu.  As we were walking to the checkout counter, we realized we didn’t know how long or how much to cook our items, so we returned to the deli counter and asked a clerk there about cooking times.  In a less than informative session, after seeking guidance elsewhere, he told us to microwave them both some indeterminate amount of time, advice we viewed with a certain level of skepticism as the pot pie was encased in an aluminum pie tin.

Back at the apartment we made our best guess about cooking times and warmed up the food, the winner being the relleno as the pot pie was a disappointment, not much chicken, mushy gummy crust, likely inferior to any decent frozen option (Marie Calendar’s, etc.) one would find in the freezer section of your local market.  But the salad and tiramisu were winners as well and we happily concluded that our shopping gambit had paid off. 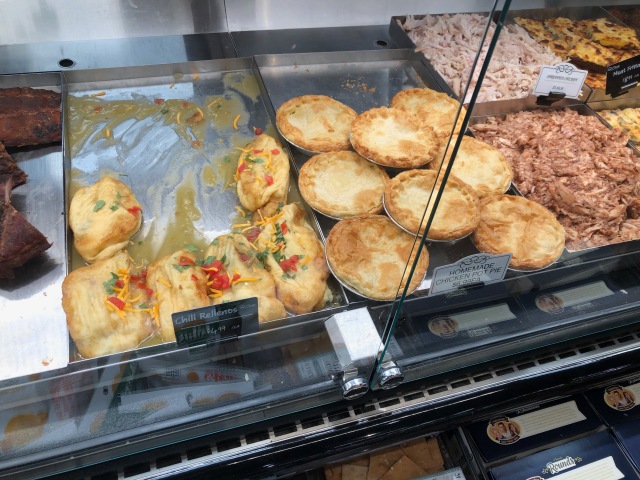 Take Out at Clark’s Market

The next day we set out for a longer ride, this one to take us on a 40-mile loop around the Sedona area.  We started out riding south on the 179, OK to do fairly early as the traffic whizzing by was limited and allowed us to concentrate on staying off the rumble strips that populated a wide swatch of the shoulder we were riding on.

It only lasted for less than four miles before we turned off on Beaverhead Flats Road which led us to Cornville Road and then to Page Springs Road, a scenic section winding through canyons and stream-side into Page Springs.

A small climb took us up to Highway 89 followed by a long but manageable ascent into Sedona, eventually landing us back at the roundabout intersection with the 179 where we jogged into the center of town for yet another piece of that really good apple pie.

Heading Up the 89A

We then followed the route of the day before, the last climb seeming shorter this time for having done it a day earlier, with the descent back to the apartment a delicious way to finish a long ride.

Stopped at the Summit of the Last Climb

Our original plan for the rest of the day had been to complete the second half of the driving tour, but upon closer examination, we determined that we had done the bulk of it, leaving just a long out and back on Schnebly Hill Road, which I had ridden up on my bike those many years ago.  After our long ride of the day though we felt like we’d done enough and were content to hang out and relax all afternoon.

As usual, we surveyed Trip Advisor and determined we’d do dinner at Corner Table, which had an interesting looking menu worth exploring.  We were seated at a table for two at the outdoor patio and started with a glass of Numanthia Termes Tempranillo for Joanna (after our 2017 hike on the Camino we always order a Rioja when we can find one) and a Chateau Tumleweed Sandy Jones, a neutral-oak aged Chardonnay for me, to accompany our starter, the Roasted Vegetable Strudel (tomatoes, asparagus, balsamic caramelized onions, goat cheese in puffed pastry). 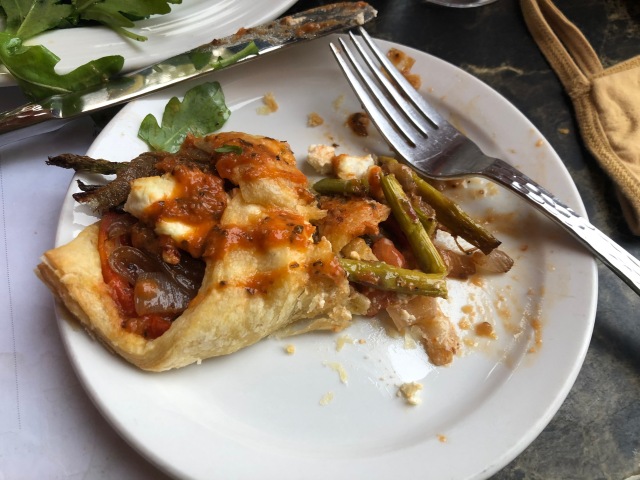 It was a nice way to begin the meal, the asparagus a dominant part of each bite, but in a good way.  We split an entrée of Crab, Bacon and Alfredo Linguine which I accompanied with a glass of Rainstorm Pinot Noir from the Willamette Valley.  The portion size was large, and they split in two for us without charging for the second plate, a nice touch.  We enjoyed the linguine, but as the make-up of it mirrored the starter to a degree, we might have better off with the option we considered, the Cajun Prawns with Spanish Sausage and Chicken.  It would just give us something to look forward to when we visit again.

The tab came to $94 including tip, reasonable enough for what we had ordered, and we rolled back to the apartment pleasantly full and satisfied after a long and rewarding day.  The next day with just a short 30-mile drive ahead of us afforded us the opportunity to dawdle a bit in the morning.  We thought we’d get a big breakfast at the Coffee Pot, recommended by our friend Nancy in Charlotte, but upon arrival the long wait and potential lack of outdoor seating sent us on our way.

Instead, we found Los Rosales, a Mexican joint, not far away and stopped in there.  As it was early in the day, we opted not to avail ourselves of pretty good-looking margaritas, instead choosing some Pepsi product (I’m a loyal Coca Cola customer) to go along with the Chicken Flautas (as we know them here, taquitos) combination plate we split, replete with rice, beans, and guacamole.  Not quite the big traditional breakfast we’d been anticipating, but good non-the-less and more than enough to send us on our way to Flagstaff.