Compared to our first couple of days on the road, our drive to Mobile seemed short at about six hours. Interstate 10 takes you past New Orleans and through Bayou Country, miles upon miles of swamp bordering each side of the highway. A stop at a Chik-fil-A netted us a chicken sandwich, fries, and Joanna’s seasonal addiction at the time, the Peppermint Chocolate Chip Milkshake, providing the sustenance to get us to Mobile in the late afternoon for our overnight stay at the Mobile La Quinta Inn.

This would be our first stay at this chain, which we’d selected for their pet friendly fee free policy (most places charge anywhere from $10 to $25 for a pet). We were impressed with the lodging, a fairly new site, with generous sized rooms and the accouterments we’ve come to expect from these mid-level chains (free Wi-Fi, breakfast, flat panel TV, and in some rooms a mini-fridge) for a budget friendly rate of $84 including taxes. 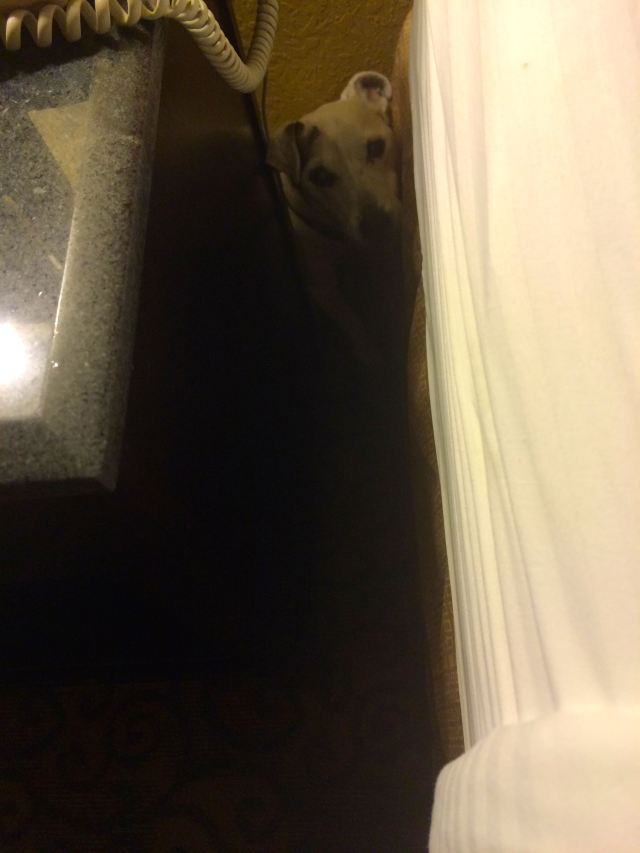 Our Ageing Dinky Dog Sometimes Get Lost in Unsual Places

James and Leigh stopped by to pick us up for dinner bearing two mixed six packs of local micro-beers, all the more the shame as we needed to head to the restaurant without being able to taste one with them. Our destination was Spanish Fort and the Bluegill Restaurant, out on Battleship Causeway. When you first enter the restaurant it has a more formal indoor feel; we made for the back of the place, out on an enclosed deck that looked out upon Pass Picada. We took our seats at a booth at the exterior windows, offering a last glimpse of the setting sun.

James and I each ordered a Lonerider Sweet Josie Brown, while Leigh choose a glass of white wine and Joanna got the winner, a very good Bloody Mary for $4.50. A dozen oysters for the table set us up for yet more food from the sea. Joanna ordered one of the day’s specials, two crab cakes and sides. When it came to the table it was a huge portion, so much so that she and I could have easily split it. I went for the catch of the day, a blackened local fish resembling Tilapia and for just a bit more, a side of fried shrimp to accompany it.

As mentioned with Joanna’s dish, I got a plateful as well and with some effort, managed to finish it, knowing that one of Joanna’s crab cakes would go home with us to Charlotte on ice in the cooler. We finished up our meals and had a nice ride back to the La Quinta, enjoying the company of James and Leigh, thinking about future trips when we might pass through here again.

The drive to Charlotte the next day was uneventful, just another somewhat long day in the car, made better knowing that our destination was home. It was good to be back in Charlotte. The many days spent out on the west coast had served to remind us of how much we missed where we had lived for so many years and yet, the time we’d spent away had worked to create a distance, a different viewpoint on our former home. 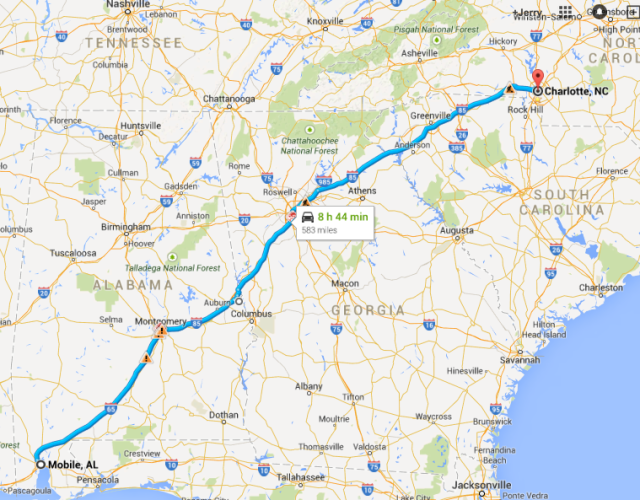 Our return to Charlotte helped to put things into perspective. That first Saturday night, February 6th I was to meet up with Hans, Eric, and his brother to attend the Queen City Brewers Festival (QCBF), a birthday gift for Eric from his wife Judith. During our seven years in town we’ve managed to form a number of friendships, many stemming from my time at UNC Charlotte but some now beginning to find a footing on their own without that linkage of work at the center. 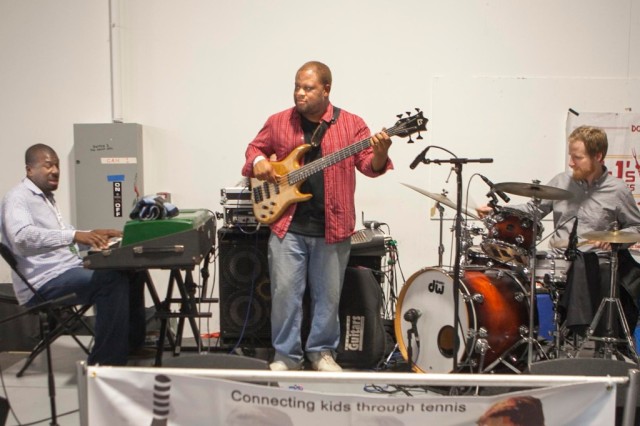 The QCBF was a fun affair; ticket sales were limited which meant a nice sized crowd. All of the brewers of Charlotte were represented with a few more from the surrounding area. A few local shops supplied food, enough to soak up the beer we were drinking and it led to an evening that made me feel glad to back in Charlotte, back home. We’d host a small Super Bowl gathering the next day with Joanna’s sister Debi and her kids and we glided into the next week, our first of many at home until our next trip. What would that trip be? We were working on a number of threads; patient readers hopefully will be rewarded when those threads become whole cloth.