We arose early enough Sunday morning to eat a good breakfast, drink a cup of coffee and take care of personal hygiene tasks before suiting up and hitting the road for the 20-minute drive back to Damascus.  This time we parked on the other side of town in a public parking area we’d noticed on Friday; it had been populated that day by a number of vehicles with empty bike racks, a good sign that cyclists used it to access the trail.

Just Outside of Damascus

We rode back through Damascus and started the first part of the ascent to Whitetop.  This section of the trail is still fairly flat with little grade so you can maintain a pretty good pace.  Once you leave the outskirts of Damascus it runs along side of Laurel Creek and Green Cove Creek for almost the entire ride crossing them over forty times on different types of bridges.  Soon it starts ascending and your pace slackens.

Stream Crossing – One of Many

Given this is a converted rail bed, the grade is very gradual, rarely over 2%, almost imperceptible except for the fact that you are riding at a mile or two per hour less than you would be if it was flat terrain.

Morning Sun shining through the trees

About seven miles in I arrived at the small village of Taylor Valley and stopped there for a few moments as I waited for Joanna to catch up to me.  From this point on this final eleven miles is steady climbing.  Not terribly difficult if you are in decent shape, the miles melt away as you glance left and right to take in the lovely scenery, the creeks on your left, ciffside on the right.  As I paused waiting for Joanna, I noticed a large branch blown down from a tree, more damage from the high winds we’d experienced two days prior.

Branch Down in Taylor Valley

Back on the trail I rode steadily until I reached the next to the last stop, Green Cove Station where I again pulled up so Joanna could catch up to me.  The station was crowded; it’s the first stop down from the trailhead and large groups either start or regroup here as they work their way down the trail.  Joanna arrived and we took off for the 3.5 miles to Whitetop Station, the last stop on the trail.  We hadn’t gone far when our group from camp passed us going the other way; we’d missed starting with them again for the second time in two tries. 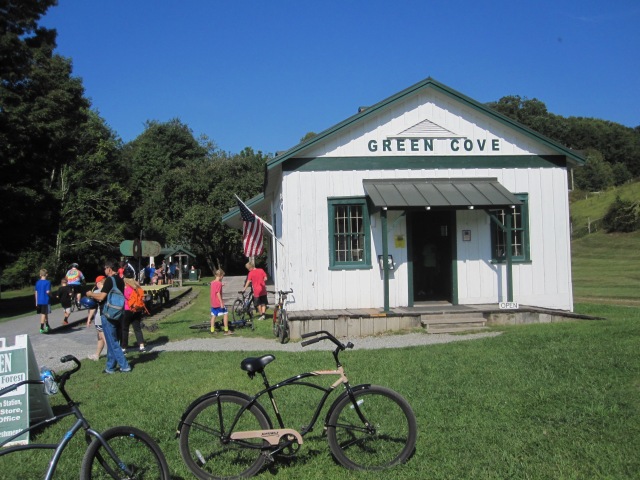 I wasn’t too concerned as I knew that they would tend to descend slowly, making a number of stops along the way and I was confident I’d come upon them once we had started back down ourselves.  Once I arrived at Whitetop I stopped for a few moments to refill my water bottles and then started back down the trail.  Joanna had arrived by this time and encouraged me to start out to try and catch the group, so I set out with gusto, enjoying the fairly easy riding the descent brings.  One needs to be careful at this point in the ride as the trail gets pretty crowded and many of the participants are not skilled cyclists, making for dangerous conditions as they swerve about on the trail, oblivious of those around and behind them.

For the entire ride back to Damascus each time I’d come upon a group I’d think it was ours and ride past them disappointed to find that they weren’t.  I stopped briefly in Taylor Valley and crossed the creek, parking my bike at the always busy Creeper Trail Café, but after perusing the line snaking out the door, realized I’d struck out again.  And so I finished my descent arriving back in Damascus having ridden 36 miles round trip, the first half a hard effort and the second half a fun ride down.

I propped my bike up against a telephone pole outside In the Country a combination deli, market, and ice cream location I knew the group would be stopping at when they finished.  Quite a bit of time elapsed before Joanna arrived to inform me that she had caught up to the group way back at Green Cove and ridden most of the way down with them, breaking off when they stopped for a picnic lunch.  To save some time and effort I jumped on my bike and rode back to the car, bringing it back to park and grab a cold beer from the cooler while Joanna and I ate a nicely done Rueben sandwich we’d ordered from the deli. 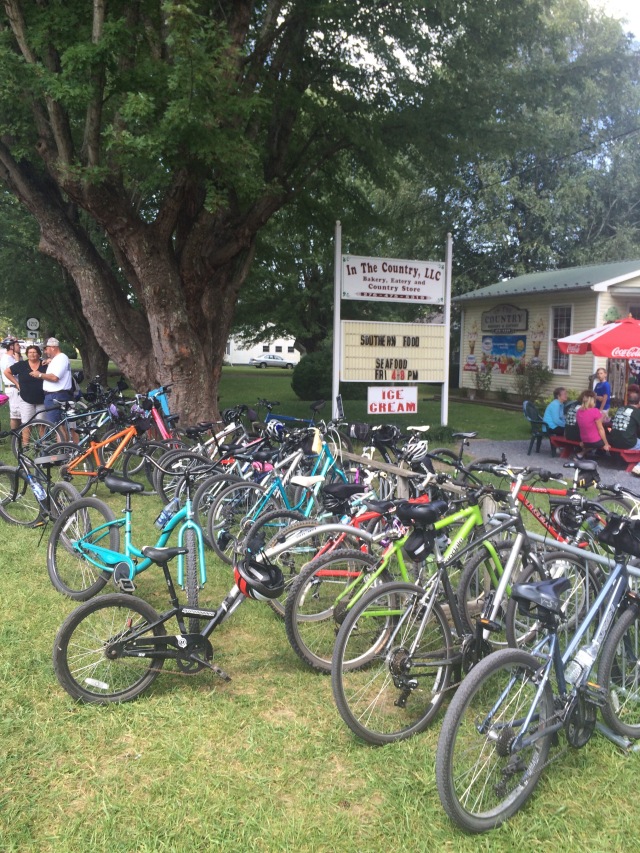 Not long after we finished eating the group appeared and went about ordering food and ice cream.  It turns out they had detoured off the trail before Green Cove to view a Christmas Tree farm and that is where I passed them.  We spent another hour or so sitting out on the patio, conversation flowing before heading back to camp.  Joanna and I discussed detouring to a fairly new brew pub just outside of town The Damascus Brewery, but as we were climbing into the car we were approached by a cycling attired gentleman who asked us if we could give him a ride up to Whitetop to fetch his car.

We agreed to do so and although it took us a bit out of our way were glad for the effort as the good deed might come back to us someday.  We arrived in cam  a bit tired from the days effort and put together a quick camp dinner of boxed rice and a package of Tasty Bite Tikka Vegetable Masala, a simple but filling meal.  We’d used this product back at the Outer Banks and combined it with canned Brunswick Stew, but still full from the Rueben we’d had earlier didn’t feel the need to augment it this time around. 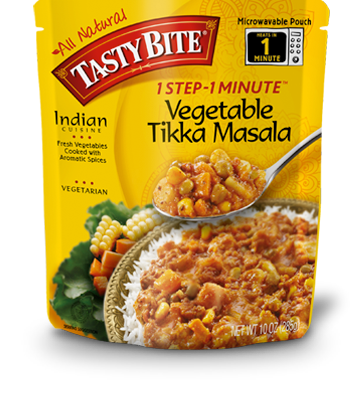 We made one more trek up the hill for some desert and conversation, then closed out the evening with a good night’s sleep.  We took our time breaking camp the next morning not having to hurry home nor having much of an agenda while we did so.  Our last time here we’d driven out curvy narrow Highway 91and stopped at Grayson Highlands for a quick hike up to a lookout point.  This time we decided to follow Highway 58 out of camp and drive to Galax picking up I-77 there for a quick drive home on the interstate. 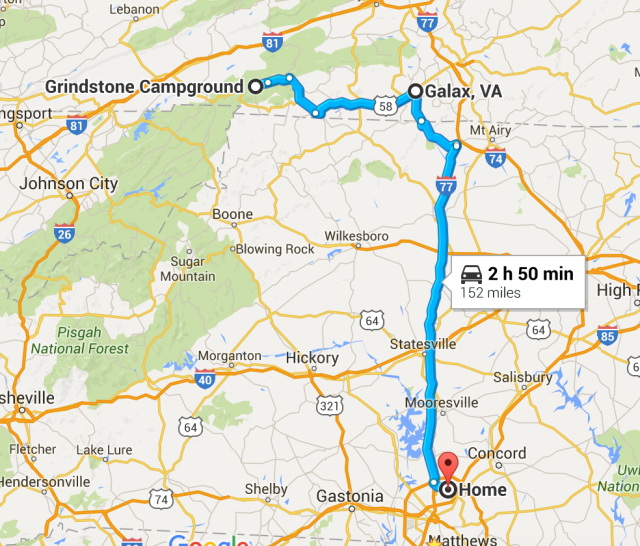 It’s a gorgeous drive, made more so by blue skies full of big white clouds.  We arrived in Galax, a jumping off point for the New River Trail, another local Rails to Trails adventure and parked downtown.  We walked up and down the main drag, browsing at a number of antique stores before stopping for our final meal of the trip at The Grill, a dive looking place with a long bar and cheap food and beer.

We pulled up to the counter and ordered a burger, grilled cheese sandwich, and Pabst Blue Ribbon beer.  The tab came to less than ten dollars, the food was filling, satisfying and the perfect end point to a great weekend.  After we finished eating I wound my way to the back of the establishment to hit the restroom (a small resource that I don’t think met any health codes, past or present) and passed six picnic sized tables, full of locals drinking beer similar to Pabst and just generally enjoying the afternoon.  It was a touch of life near the mountains of Virginia, miles away from Charlotte by any definition.  I sense a return visit to do the New River Trail.  Care to join us?