We broke camp the next morning and with a nice four-hour drive ahead of us stopped in Fort Bragg for a breakfast at the coffee joint we’d visited in prior trips, Headlands Coffeehouse.  It was crowded when we arrived with just one small table open, which we grabbed while ordering a bacon breakfast sandwich and a chocolate croissant. 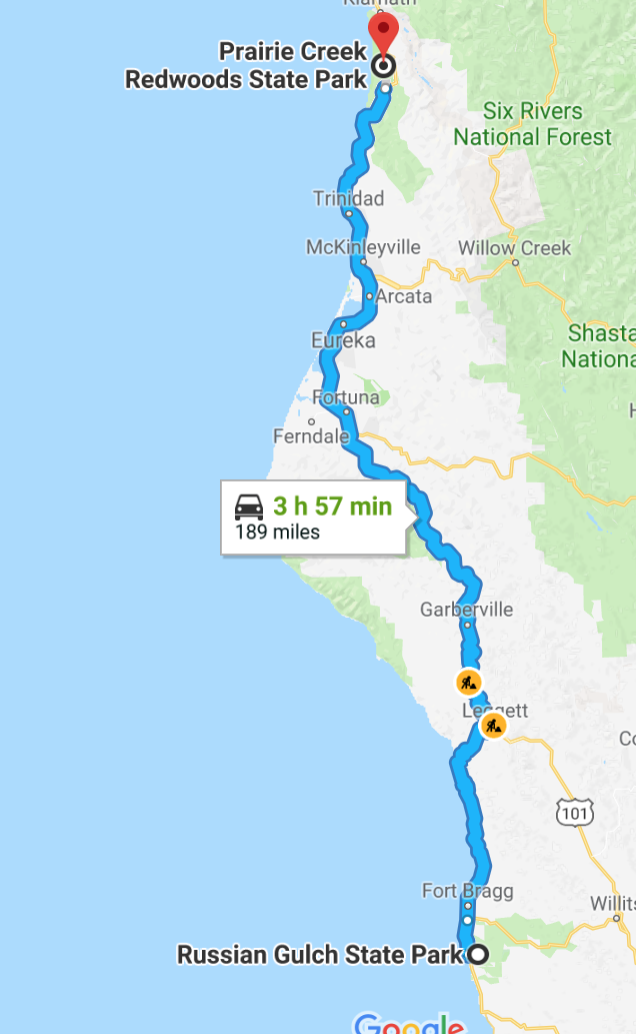 Sitting in a ray of bright sunshine from a nearby window, we enjoyed a leisurely moment before climbing back into the car for the drive to Prairie Creek Redwoods State Park. 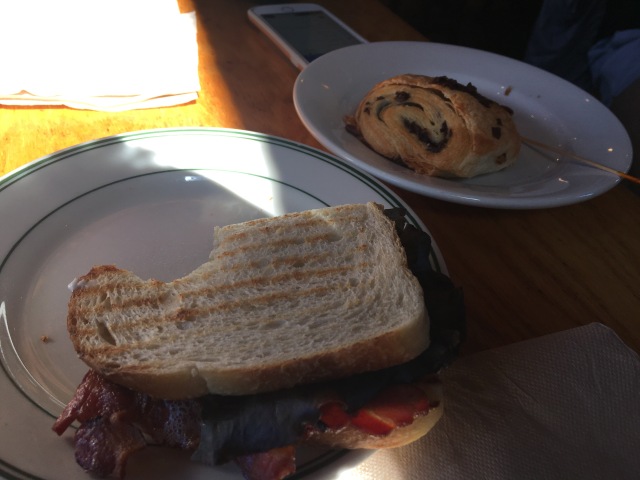 Sandwich and Croissant at Headlands

This one wouldn’t be as arduous as the one to Russian Gulch, much of it taking place on the inland section of Highway 101.  Cognizant of the fact that the park sits in an isolated part of the coast, we stopped at Lost Coast Brewery in Eureka, home of Great White and Downtown Brown, is the obvious choice. 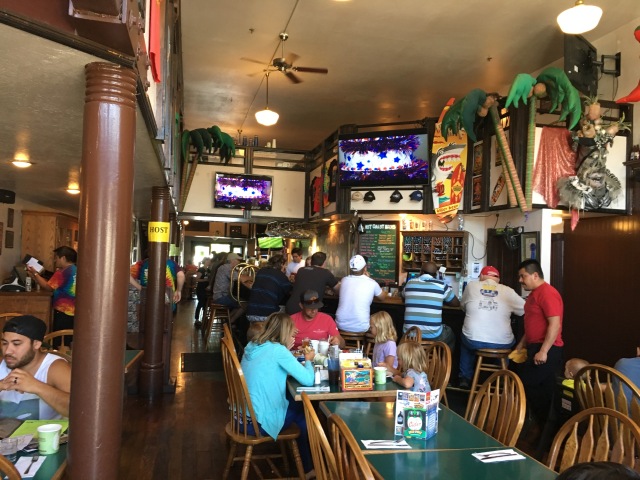 We were seated inside and ordered a beer apiece, for Joanna the Great White and me the Fogcutter Double IPA.  To eat she got the New England style Clam Chowder and I the Lost Coast Tacos, one Carnitas and one Fish. 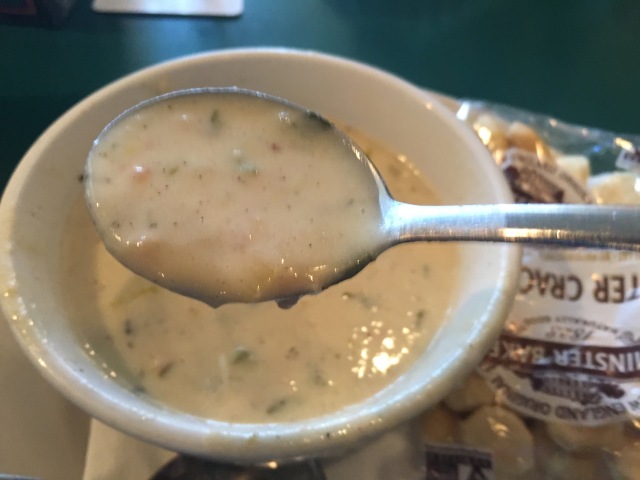 The slightly stronger beer and two simple tacos went down easy; up to now, and continuing in the future I’d eat an ample amount of fish, either in tacos or fish and chips, with the occasional filet thrown in. 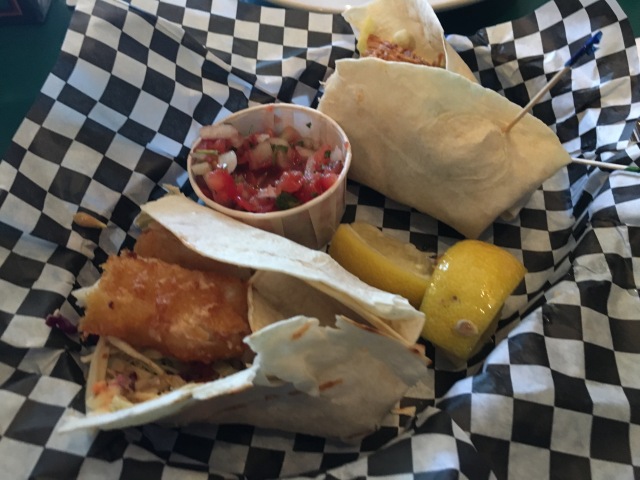 Nearing the park, we stopped in Orick, the town just prior to the park hoping to find a market with food we could purchase for dinner in camp.  The place was big but dimly lit and offered more general merchandise than real food.  Not knowing what lay ahead, we pulled lunch meat out of the refrigerated cases which we would combine with a box of Mac and Cheese for our meal that night.  We made it to the park and pulled up to the ranger kiosk only to discover that we were not at Elk Prairie campground, immediately adjacent to the Visitor Center and the heart of the park, but instead at Gold Bluffs Beach, back five miles on Highway 101 and then a six-mile trek on a dirt road away. 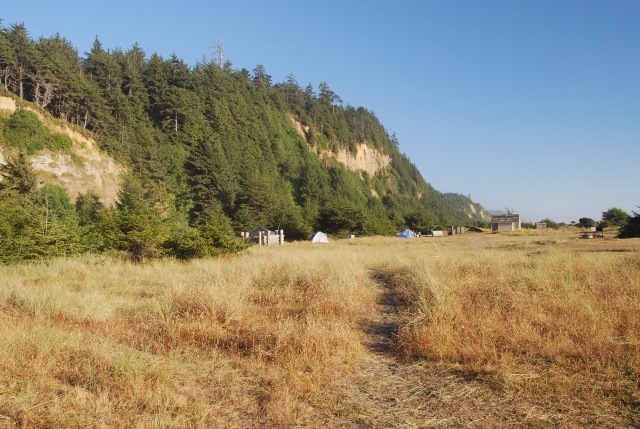 We made it to the turnoff and hit the dirt road, which seemed awful the first time but would subsequently become not a big deal with repeated trips.  Locating our campsite, we set up the tent with crashing waves in the background, a sound that would follow us day and night, a constant reminder of the power of nature not that many yards from us. 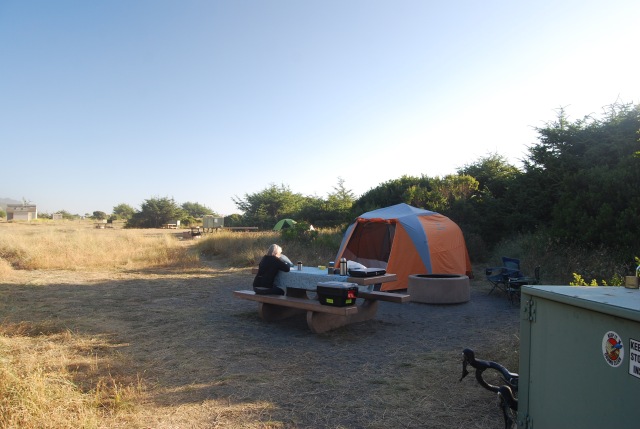 We did some rudimentary exploring around camp, walking down to the beach and then prepared a simple supper with the ingredients we’d picked up earlier.  As it was Joanna’s birthday, we’d picked up two small snack cakes at the market and made as much of a celebration of it as we could.

As much as I’d wanted to camp up in the Redwoods, Joanna loved being at the beach and I will admit it had its charms, except for the ever-present dirty sand (see Morro Bay posts one and two) that seemed to dog your every step 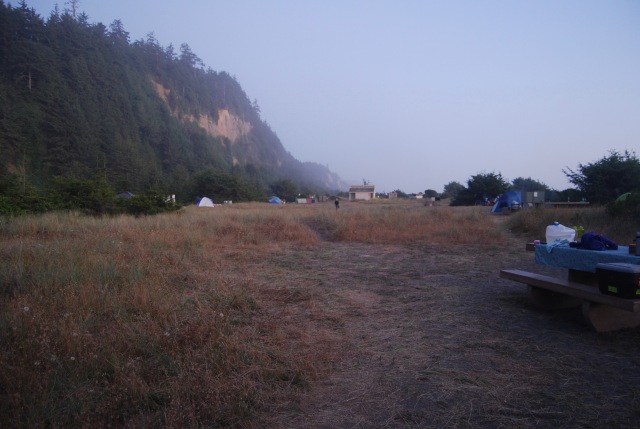 A Damp Morning in Camp

Our plan for the next day was pretty simple; hike more than five miles on one of the redwood trails and then grab a bite to eat in the town of Klamath, just north of the park, leaving the following day open to ride our bikes on a 19-mile loop trail around the park.  We started off at the Visitors Center, picking up information about hikes and most of all the that the area is famous for. 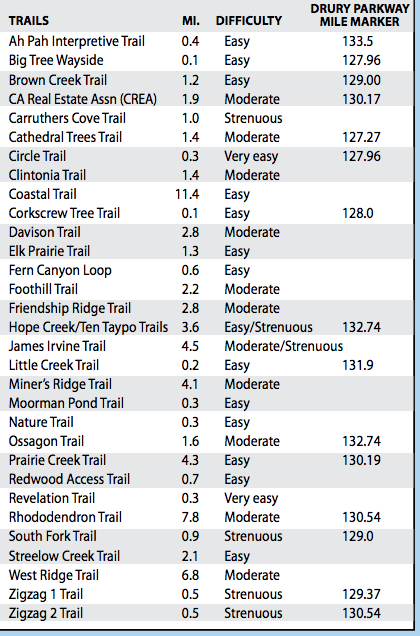 Coast Redwoods are an evergreen, long-lived, monoecious (having both the male and female reproductive organs) tree living 1,200–1,800 years or mor; they are among the tallest living trees on Earth, reaching up to 379 feet in height (without the roots) and up to 29.2 feet in diameter at breast height.  Among the oldest living things on Earth, before commercial logging and clearing began by the 1850s, they occurred naturally in an estimated 2,100,000 acres along much of coastal California (excluding southern California where rainfall is not sufficient) and the southwestern corner of coastal Oregon within the United States. 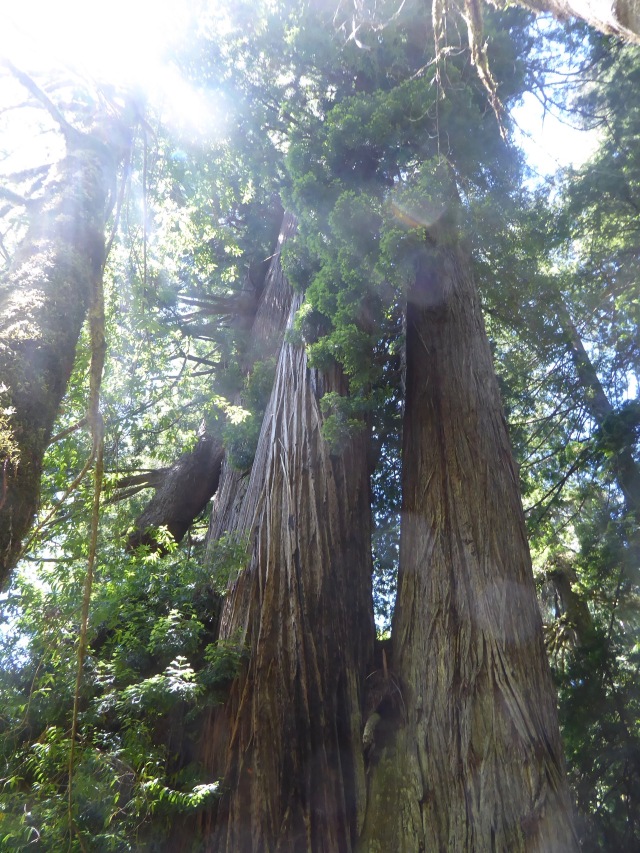 Pictures Don’t Do Them Justice

We set out on the Prairie Creek trail which winds its way through the forest for three miles or so before coming to a junction with the Zig Zag Trail, where we turned around to double back to the South Fork Trail, where we crossed the Drury Parkway to meet up with the Foothill Trail which would take us back down to the Parks “Big Tree”. 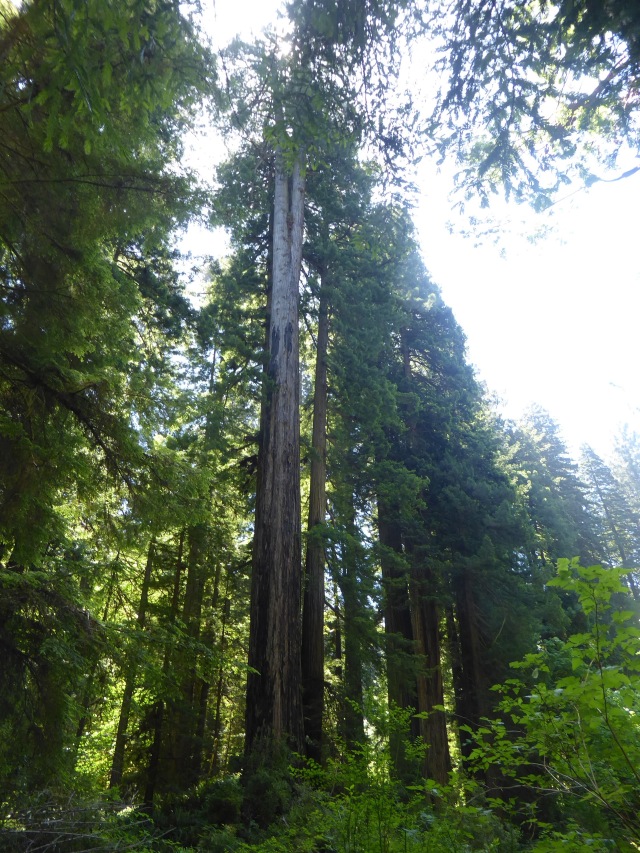 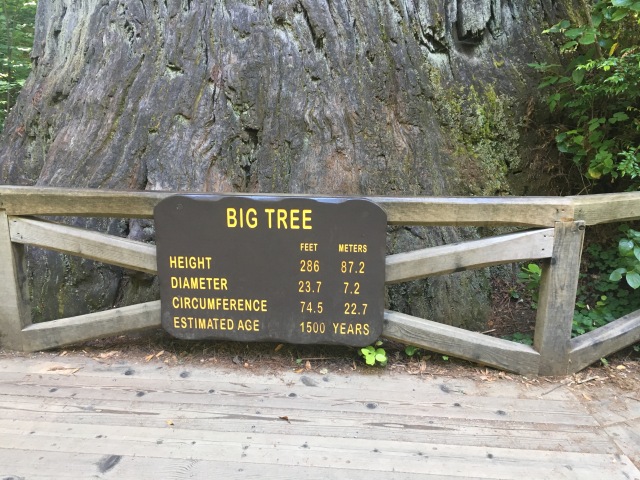 The Big Tree is not the biggest in the park or in other groves along the coast, as documented in a fascinating book we read around the time we visited here, The Wild Trees by Richard Preston.  A best-selling non-fiction author, he chronicles the escapades of a group who pioneered redwood climbing, including botanist  Steve Sillett, lichenologist Marie Antoine, and Michael Taylor.  They inadvertently discovered a thriving ecosystem hidden among the tree tops, 200–300 ft above, of redwood lattices, berry bushes, bonsai trees, epiphytes, lichens, voles, and salamanders. 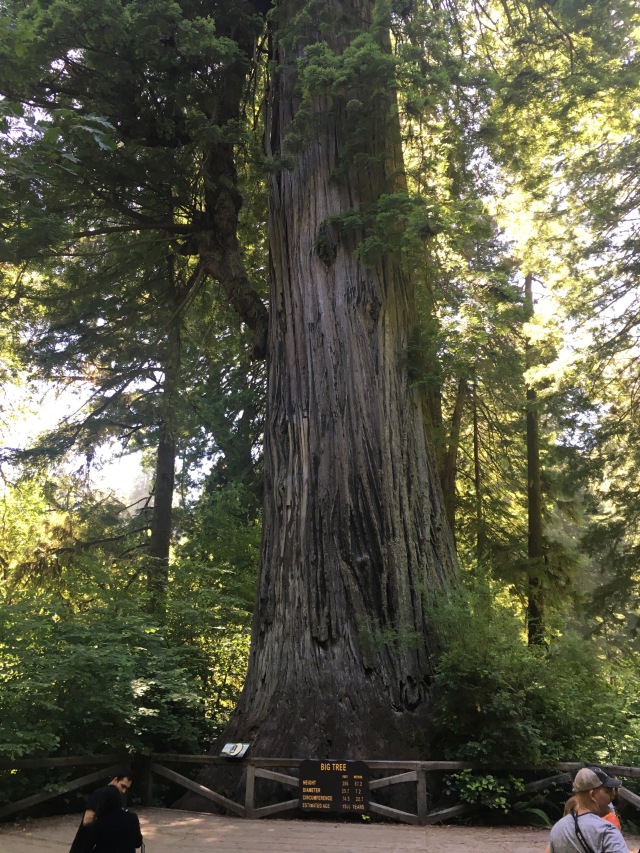 Most of the Big Tree

It was a great hike, long enough to be tiring and yet we felt good, buzzed about the place and looking forward to a good bike ride the next day.  We finished and then drove up to Klamath, supposedly the home of (per Trip Advisor reviews), nine separate eating establishments.  Of the four we located, only one was open and that was the Pem-Mey Fuel Mart, a combination gas station, market and fried chicken concept. 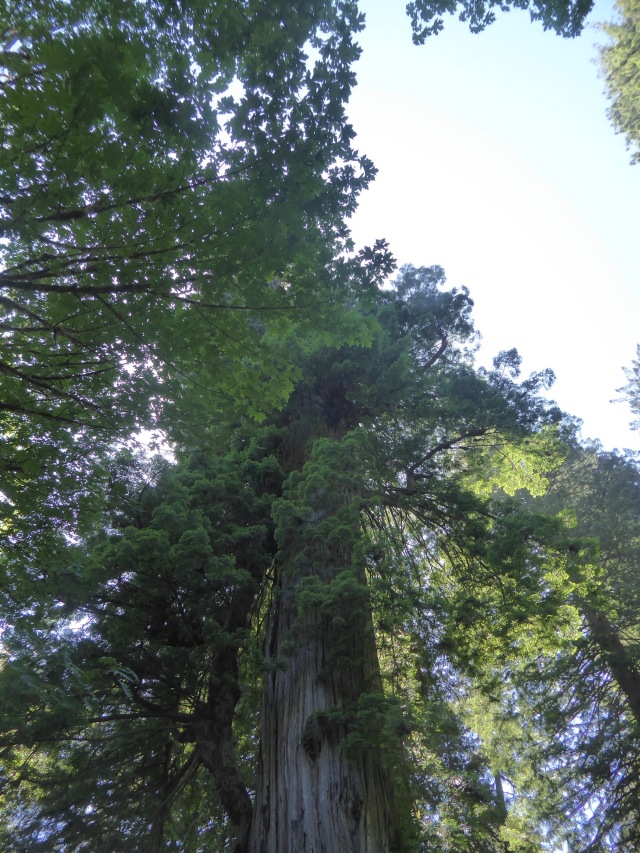 Top of the Big Tree

Located within the Yurok Indian Reservation, Klamath is an unincorporated rural census-designated place with a population of 779 in 2010.  The original town center was destroyed by the 1964 Flood.  Streets and sidewalks of this original site, west of US 101 and the current site of the town’s core, remain visible, although we never got over there to check it out. 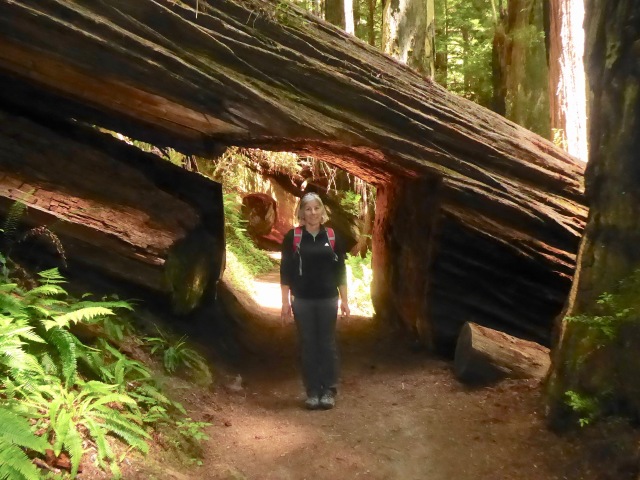 Joanna and a Big Tree

So, the Pem-May was our only option.  Hungry as all get out, Joanna ordered a steak burrito and I a two-piece white meat fried chicken combo with Cole slaw and baked beans.  It was all quite good, the chicken moist and juicy, the coating crispy and light.  Slaw and beans were good, and I shared all but the slaw with the Joanna.  Filled up we returned to camp and with a cool wind blowing off the ocean, sat in the car reading. 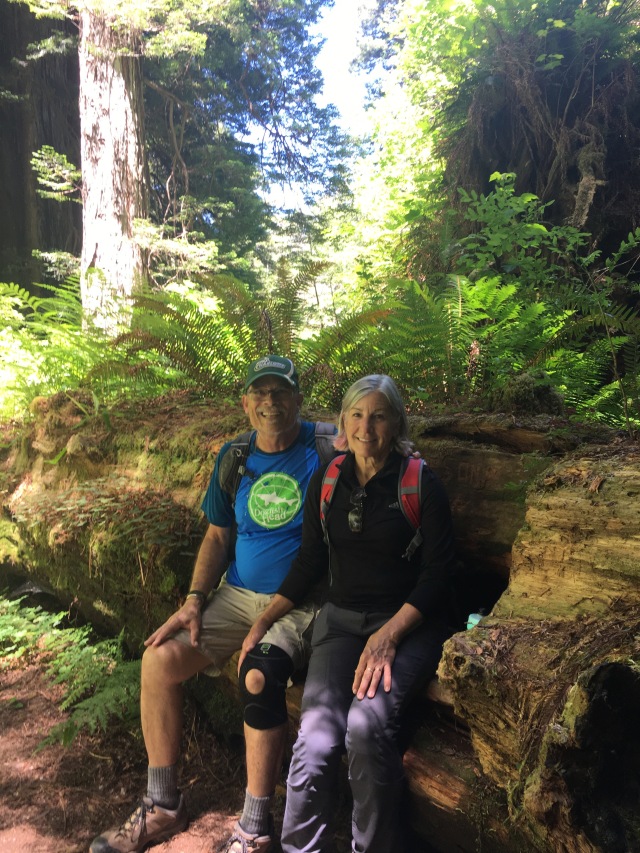 J and J on the Trail

After an hour or two I began to feel uncomfortable, belching uncomfortably with something going on in my stomach.  To make a long story short, not long after that I threw up for the first of seven times that night, the victim of food poisoning.  The culprit had to have been the slaw as Joanna didn’t try it.  Not a fun thing to deal with, my luck with illness continuing in that it happened while camping.  Fortunately, that sandy camp I didn’t like so much came in quite handy in absorbing the contents of my stomach each time I emptied it until around 4 in the morning when no more could be ejected. 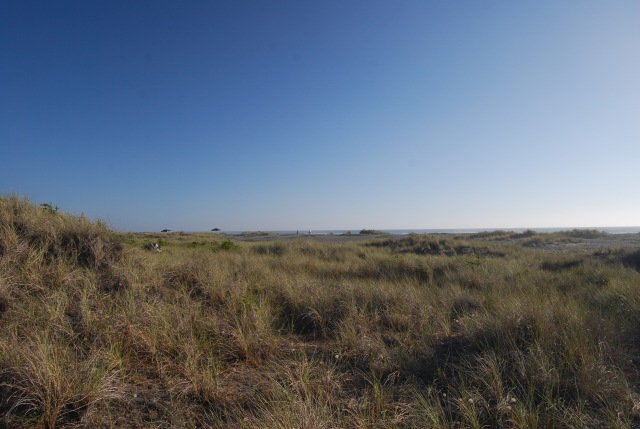 Dunes at the Beach – Glad for All of that Sand

And that was it for me at Prairie Creek.  Totally debilitated by the episode, I spent the entire next day in a fugue state, trying to see what might stay down, miles away from a store and the typical things you’d use to nurse yourself through an episode like that.  Needless to say, I got a lot of reading done.  Joanna went for a ride and then hike up Fern Canyon, the place I remember most from my stay here with my parent’s way back when, a place I’ll just need to return to someday. 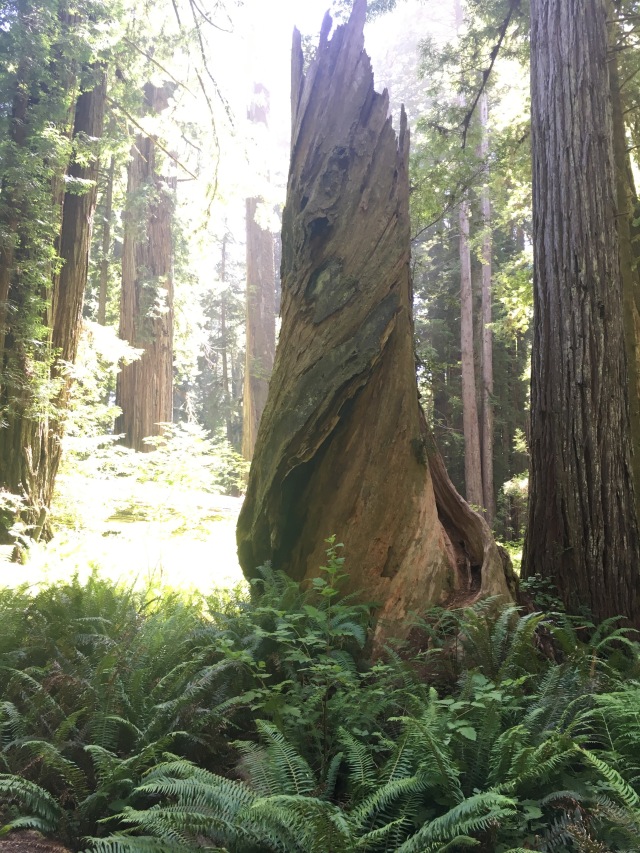 Recovered to a degree the by the next morning, we’d break camp and head north to Kamp Angst, and the on to Bend, looking forward to a week or more staying with friends and family.  And maybe, just maybe, no more digestive issues. 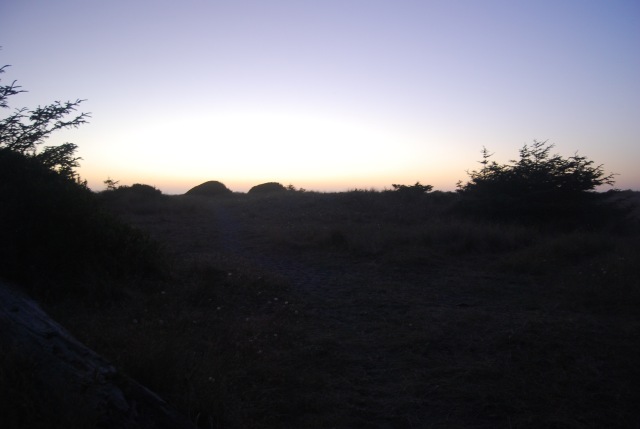