Over the course of the next four days we’d devote two of the days to bike riding and two to sightseeing. Our rides took us along pretty much the same route, northwest out of camp along the canal, following the bike signs as we went. Our second go at the ride was a bit longer than the first as we’d started out trying to head down towards Potsdam as a diversion, but of course got turned around, found ourselves back near camp, and so just repeated the ride we’d done the first time.

Canal Near Camp at Start of Ride

This is very pretty countryside, the bike path dipping in and out of forest as it tracks a course along the Templiner See (Lake) and the many marinas that line its shore. 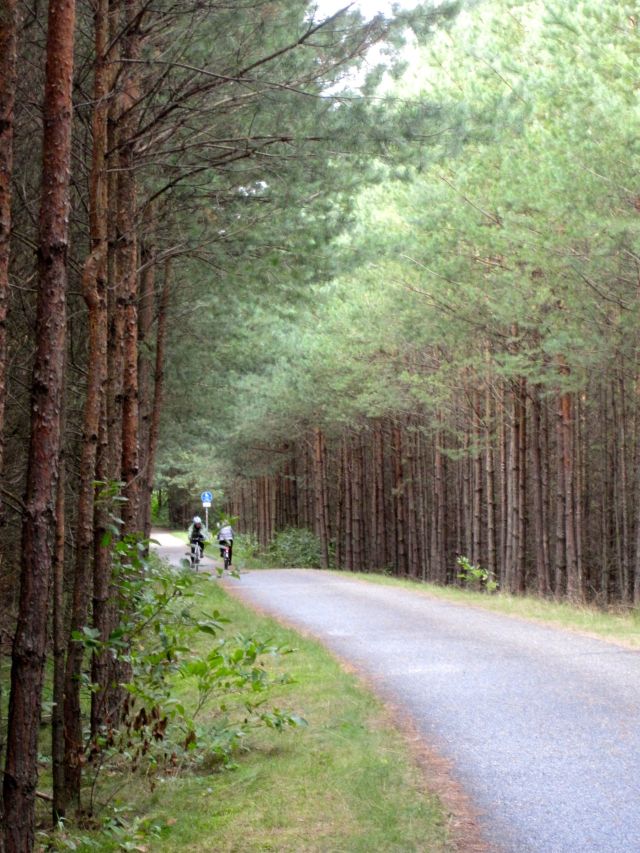 Path Through the Forest

The area is full of Dacha’s, small plots with the size restricted using Russian standards, that is no larger than 60 m² (~646 square feet) of living area and one story tall. A sign we read about them along the path stated that a large percentage of East German’s owned or used one compared to their counterparts in the west. 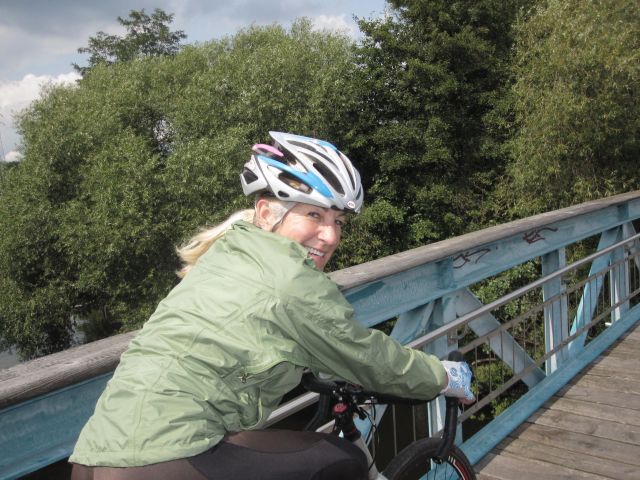 Joanna on the Ride

Also dotting the countryside are numerous memorials to individuals who died trying to escape East Germany. We stopped at most to read the tribute and remark on the drive that compels people to risk their lives to gain freedom, a better standard of living, or both. During the first ride, as is our custom on most long rides, we took a break a little over halfway at a charming lakeside Gasthaus, the Jagohaus, to sit outside on their spacious patio and enjoy (yes you are way ahead of me here) two cups of coffee and a fruit based desert. 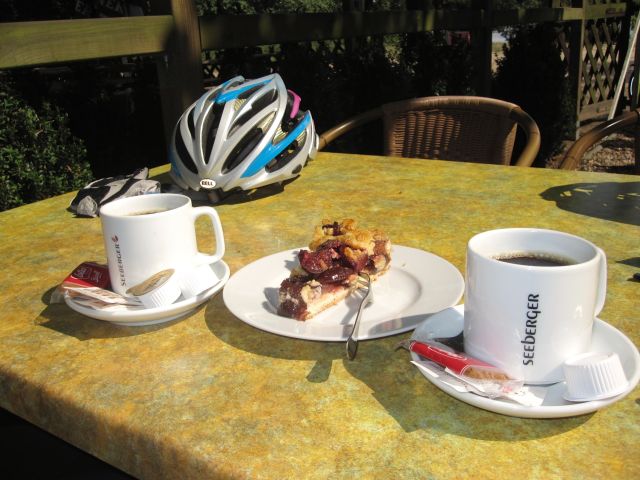 At the end of each ride we stopped in at the Reichelt for dinner supplies. One of the nights we purchased two marinated chicken breasts and a package of refrigerated cream based sauce. We mixed the sauce together with pasta and some frozen vegetables to accompany the chicken; it made for one of the easiest and best tasting meals of the trip. Also consumed wasa bottle of our trusty go to wine, J.P. Chenet, either a Rose or White blend, and we later took advantage of the good quality pay Wi-Fi and comfortable dining area at the campground’s reception. 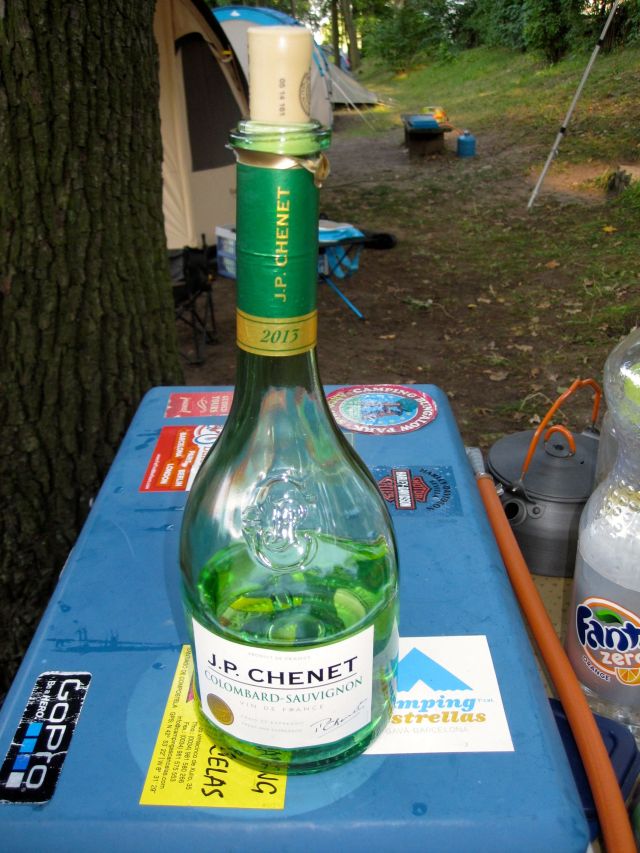 Throughout our stay we found the staff there to be friendly and likable. The folks manning the reception desk worked ten-day shifts, so we became pretty familiar with the two who spanned our stay. Almost every encounter with them included an engaging conversation that answered our questions, provided us with information, and allowed us to covey a bit of ourselves to each other.

The first of our two final trips to town took us to the DDR Museum. It provides a comprehensive and accessible glimpse at living behind the iron curtain, particularly the East German and Berlin side. Highly interactive, the numerous displays invite one to experience day-to-day life and how limiting it must have been. The one downside to the visit, given our timing, was that it was very crowded, making it hard to really spend the time necessary to absorb each exhibit.

A couple of specifics that stayed with me regarded their standard of living and how a planned economy cannot compete with a market economy. East Germans were fairly well compensated for the work they performed and generally had enough money to spend on the goods they needed to provide a comfortable life style. The problem was that goods of higher quality were usually exported to the west in order to acquire hard currency (the East German mark not worth much in the open market). Thus little of real value could be found in the stores.

We left the Museum and walked past Alexanderplatz and to the Camp 4 Store, located on Karl-Marx-Allee, the built to impress boulevard constructed by the GDR between 1952 and 1960. We were starting to run low on gas in the large cylinder we used to power the Camping Gaz stove and replacing it would be problematic, not too easy to find a dealer and somewhat expensive. One option for us would be to switch over to using one or both of the MSR backpacking stoves (Superfly and International) we brought to stretch out the remaining fuel left for the Gaz stove. Thus I’d need to buy another canister of gas for those stoves. 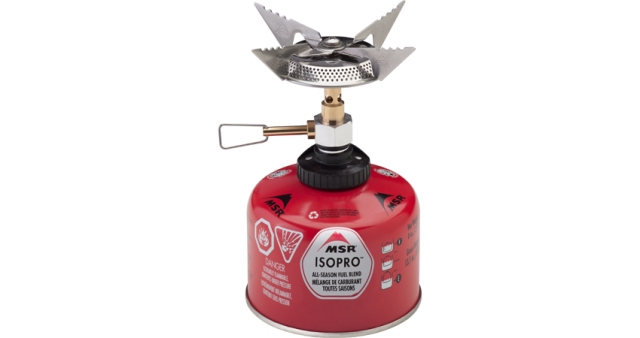 This is a modern well-equipped shop, just like one would find in the U.S. It reminded me a bit of one of my favorite Los Angeles stores, A-16. With a large selection of well-known brands and products, it is easy to lose track of time in a store like this and worse, to spend more money than you had intended. We escaped with our finances still intact and headed for camp, stopping in Hasselhorst on the way for a final meal at our favorite Kebab stand, splitting a gigantic salad, some beers, and one of those tasty Shawarma wraps.

The last of our day trips would tie together the rise of the Nazi’s and the impact of the wall. We started at Potsdamer Platz for a quick look at the Sony Center. From there we walked to a DDR Watchtower, one of only a few such towers still standing. Built in 1966 for surveillance, it was constantly manned by two guards who were forbidden to get to know each other so they could effectively guard against the other escaping. 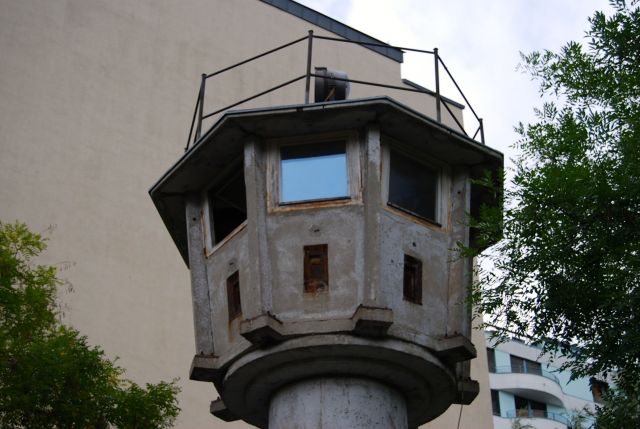 A block away is a line in the pavement that indicates where the Berlin Wall once stood (it traces about 25 miles of the wall through the city; nearby inside the Ministry of the Environment a nicely painted stretch of inner wall has been preserved in its original place. 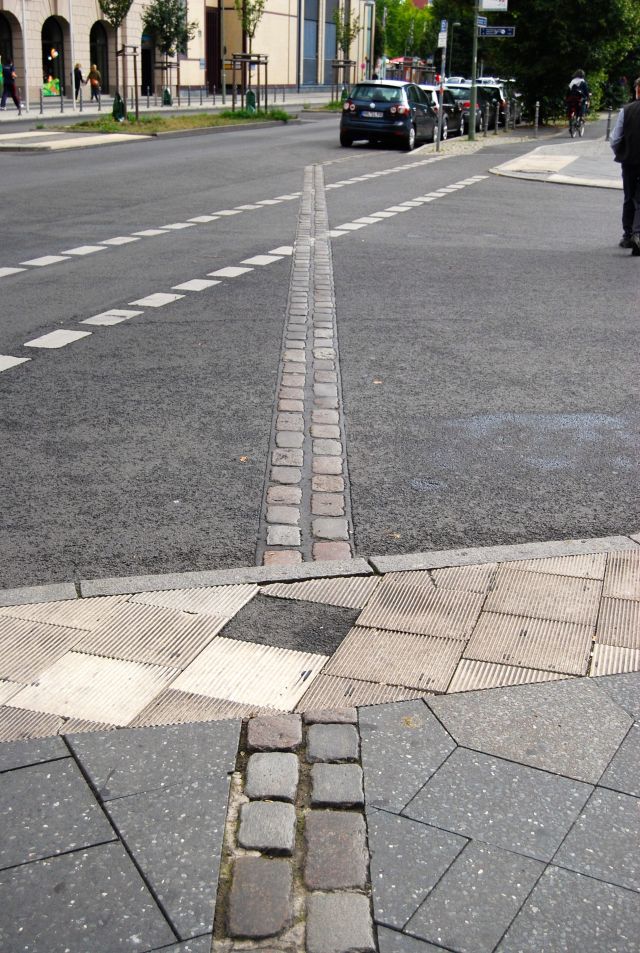 Path of the Wall

We next made our way to the Topography of Terror. Located behind a surviving stretch of the Wall this property was once the headquarters for the Gestapo and the SS. This plain building focuses on the perpetrators rather than the victims of the Nazis. It’s thought provoking to see just how seamlessly and bureaucratically the Nazi institutions and state structures merged to become a well-oiled terror machine. Mostly written explanations and photos, it is like reading a good textbook standing up.

We spent some time viewing the temporary exhibit on Warsaw outside against the surviving section of the wall and then walked a number of blocks to Checkpoint Charlie, before retracing our steps back to Potsdamer Platz. We’d noticed a Vapiano’s located there earlier in the visit and decided on it for dinner, being familiar with the chain from Charlotte. It is a fast Italian concept where you go to a station and order your selection (salad, soup, pizza or pasta) and the pasta (made fresh daily) is quickly prepared using induction cooking.

The place was crazy busy and after a long afternoon of walking it wasn’t the most relaxing of environments. We found seats at one of the counters and Joanna fought her way in line to place our order for the pizza and salad combo. We enjoyed our meal along with a couple of Berliner Kindl’s and then returned to camp, tired but happy to have accomplished so much in a city we were initially apprehensive about.

Our initial concerns about Berlin’s size and scope turned out to be illusory. From the friendly gesture on the subway our first day when the older gentleman helped us find our way, to our day-to-day interaction with the camp staff, we felt welcomed and wanted. We both agree that Berlin won’t necessarily make our top ten of European cities, but if you haven’t been there, you owe yourself a visit.