Before we drove out of Fort Bragg we made two stops, the first at Headlands Coffee House (recommended by Norm) and then at the North Coast Brewery Store. Many years ago Joanna and I established a comfortable rhythm during our long driving days, where I usually start for a couple of hours and we then alternate driving until the day is done. The early morning miles usually include a couple of mugs of coffee, so the stop at Headlands was a good start to the morning. 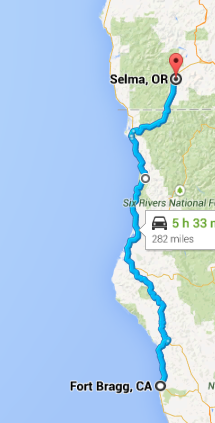 Headlands is a cozy, homey place that also serves a small menu. It was packed with folks eating, socializing, and working, a common occurrence in today’s world where many use a place like this for their office. I was sorry we were heading out as it would have been nice to spend an hour or two there, eating what appeared to be appealing food, working on the laptop, enjoying the morning as it unfolded in front of us.

Our brief stop at the Brewery shop netted a couple more big bottles of beer and a souvenir glass to take home to our friend Kemet. He and I exchange beer glasses and my growing collection attests to the number of breweries he has visited. Our drive went smoothly from there. The first couple hundred miles to Crescent City takes you through a combination of inland coastal redwood forests and twisty coast hugging scenery. Whether the driver or the passenger, it is hard to concentrate on anything else but the view during this section, it is that varied and beautiful. You could easily spend a month just in this area alone, visiting diverse ecologies as you traveled, each different from the last. 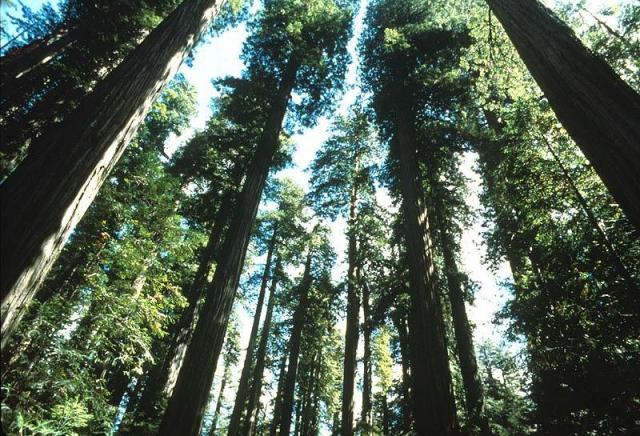 At Crescent City we turned inland on Highway 199 for the final seventy miles to the Carlisle’s house, a drive that would take us nearly two hours. This too is scenic, slowly approached driving, often on a narrow two-lane road. We’ve traversed it many times in the thirty-three years we’ve been coming to visit Kathy and Tom and each bend in the road recalls a prior visit, a memory of times past.

I met Tom in 1975 while working at the Wilshire Insurance Company. My first job out of college, I’d parlayed my California Property Casualty Insurance Agent’s license (selling auto insurance and bookkeeping for agencies and individuals is how I put myself through school) into an underwriter’s job there and it would turn out to be one of the best jobs I’ve ever had, one that would net me three friends for a lifetime; Tom, Jerry Bickham and Doug Hoggatt. 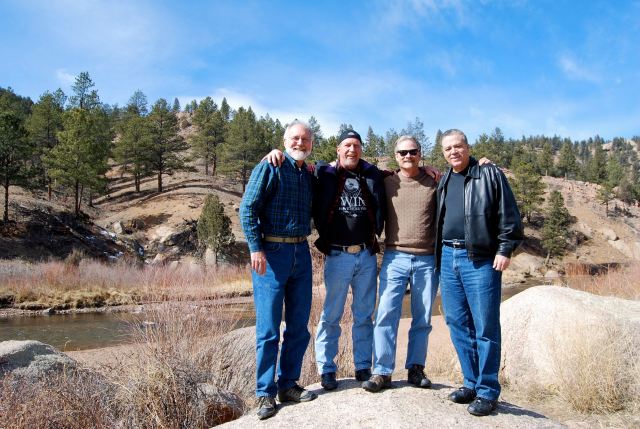 When Wilshire folded in late 1976 I made plans for my first trip to Europe the following year while Tom and Kathy would return to their original hometown of Seattle. I stayed with them for a month in the fall of 1977 at the close of my Europe odyssey, returned to Seattle for a week in the spring of 1979 just prior to my second Europe odyssey, and then Joanna and I visited their new home near Selma, Oregon for the first time Thanksgiving week of 1981, our first real trip together as a couple.

For a decade or two after that we visited Kamp Angst (as we now lovingly refer to it) almost every year, usually between Christmas and New Year’s, allowing us to complete the trip with a drive to the Bay Area to celebrate the New Year with Lydia and Walter. Visits became less frequent in subsequent years, but always eagerly anticipated, this chance to spend time very close to nature, engage in rich and engaging conversation, eating good food and of course, drinking a plethora of Oregon craft beers and wine from local vineyards, including a favorite, Foris Wines.

This visit would be no different. The house itself is located on a dirt road, sometimes full of nasty little, or not so little, pot holes, about a half mile up an always active creek from the county road which winds its way to the turnoff past Lake Selmac from Selma, itself a town that you pass through quickly on Highway 199 with its gas station, post office, market and a few other small businesses.

This is timber country, with the house surrounded as far as the eye can see by trees merging into two large national forests, Rouge River-Siskiyou and Klamath. We’ve hiked the fire roads that lead from the house, trails along the Rouge and Illinois Rivers (Selma sits in the Illinois Valley) and when possible ridden our bicycles on the country roads that lead to and from the house. 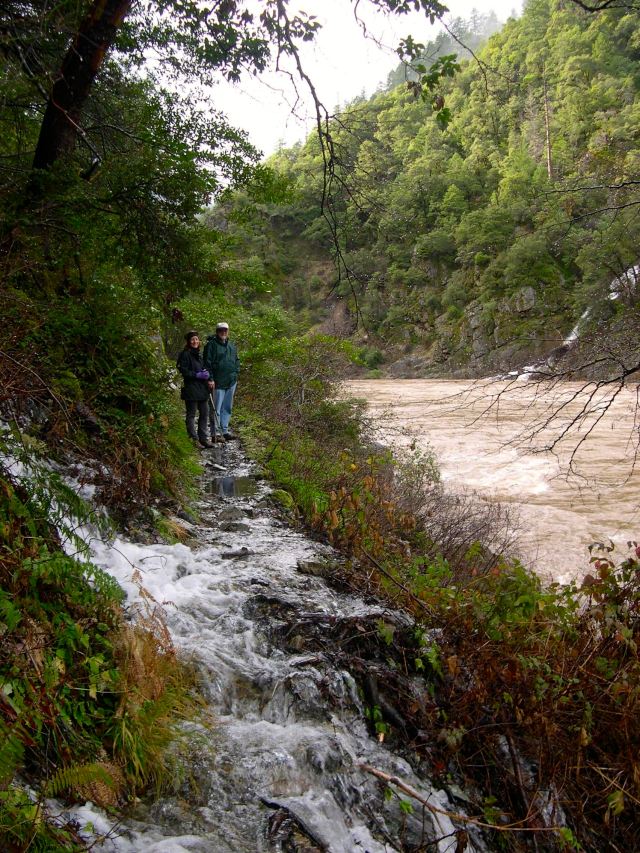 On Friday, our first full day at Kamp Angst, Joanna, Tom, and I (along with his dog and our little Dinky) ventured down past Cave Junction to the Rough and Ready Botanical Wayside, a nearly 3,000 acre combination of Oregon State Park, BLM Area of Critical Environmental Concern and U.S. Forest Service Botanical Area.

We walked the rocky path from the parking area out to Rough and Ready Creek, getting off track a few times as the area lacks designated trails. 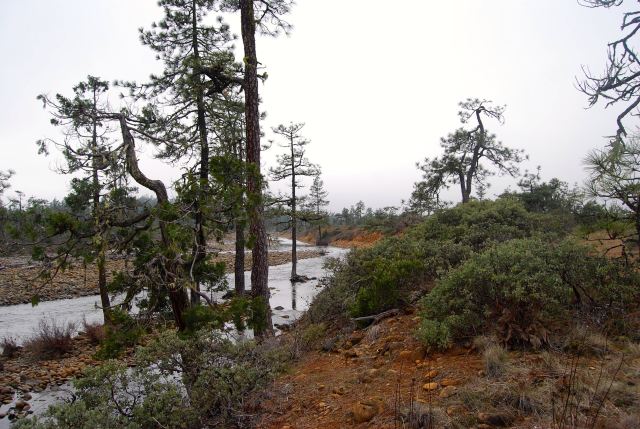 We hiked for an hour or two, picking our way over somewhat rugged terrain, joking about the many times we’ve hiked with Tom and he has promised us a shortcut, only to lead us into some form of bushwhacking (hiking off trail, often through precipitous conditions). 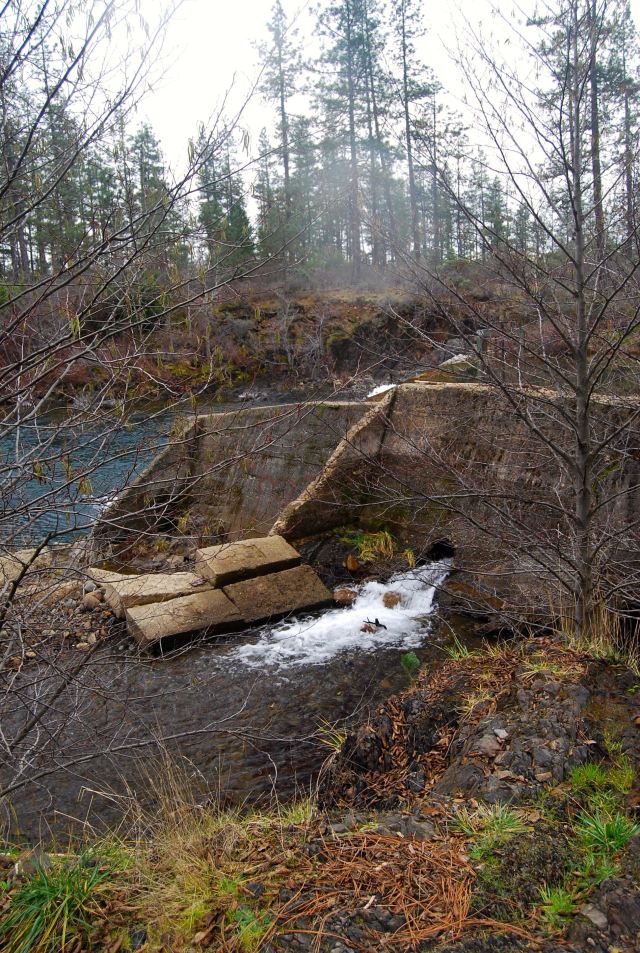 This was but a mild form of it, easily accomplished, but we did work up appetites that led to a stop at Taylor’s Sausage Store in Cave Junction for lunch. 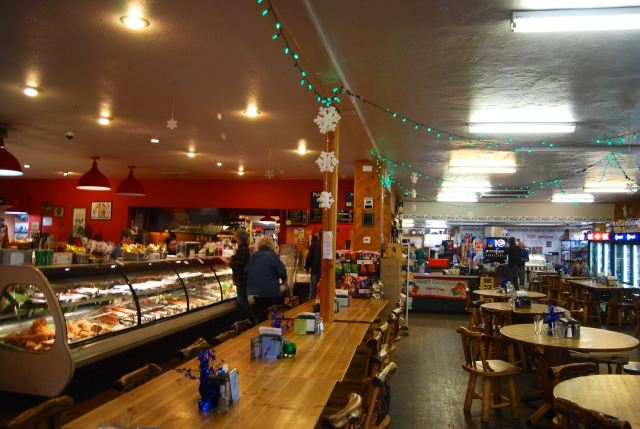 We’ve eaten here before so we knew what to expect. A large selection of hot dogs, wurst, and sausage’s, a condiment bar to dress your sandwich to your liking, and a nice choice of some local craft beers on draft to make the meal complete. It was great to be back in the heart of the Illinois Valley, enjoying the outdoors, spending time with good friends. Life doesn’t get any better sometimes.