We arrived back in Copenhagen by early afternoon and bade Simone and Dillon farewell until later that day when we would meet them for dinner back in town. Bev and I took the train back out to Vedbaek and settled in for a relaxing afternoon by ourselves as Maria and Gorm had accompanied the football team up north for their date with destiny, the Mermaid Bowl. As it turned out Robert’s team, the Gold Diggers, would lose the game on one of the last plays, with a score of 21-17.

At Our Usual Bus Stop

Cleaned up and ready for a night out, Bev and I walked down to the bus stop where we would subsequently wait almost an hour not realizing that this route only ran once per hour on the weekends. We finally made it to the train, which fortunately runs every 20 minutes and soon found ourselves at Copenhagen’s main station, prepared to walk a half mile or so to War Pigs, our destination for the evening.

We stumbled around a bit as the directions we’d received didn’t quite make sense once we left the station but fortunately, we stopped to ask a friendly local and he gave us good advice, mentioning that it was located in the former meat packing district. We arrived in no time after that and found Simone and Dillon at a table having begun a round of beers. From start to finish all that we consumed here was excellent, if a bit pricey. Working in collaboration, American brewer 3Floyds and Danish brewery Mikkeller created this unique for Europe concept with its authentic Texas Barbecue complimented by 20 beers on tap; 6 house beers and 14 that rotate.

We ordered a sampling of most of the meats they offer, ribs, brisket, pulled pork, and two kinds of sausage accompanied by the house slaw, burnt end baked beans and the fried pickles with horseradish cream. It was all quite good, full of smoked flavor, the sauces representative of various regions famous for their BBQ. We’d thought about heading somewhere else to close out the evening, but the beer was so good we decided to just finish up there, consuming a few more before heading back out to Vedbaek.

The return trip was an adventure, as we took a different route than we were used to. The train itself was sleek and modern, each coach with an open floor plan that included couch like seating. We departed at a station that we knew that Dillon used from time to time and hopped on a bus that we hoped would land us in the vicinity of Maria and Gorm’s place. Fate was smiling on us and as luck would have it this was the line we normally would take to the Vedbaek station running from its original starting point, the station we’d arrived at. Sometimes its better to be lucky than good.

We arose the next morning, said hello to Maria and Gorm who had returned late in the evening from the Mermaid Bowl and then returned to the city, exiting at Norreport to take a bus into the Norrebro section of Copenhagen for breakfast at Simone’s apartment with she, Dillon, her Mom and Mom’s boyfriend. We found the apartment, hustling under overcast skies that would turn beautiful later in the day, and were greeted warmly upon our arrival. 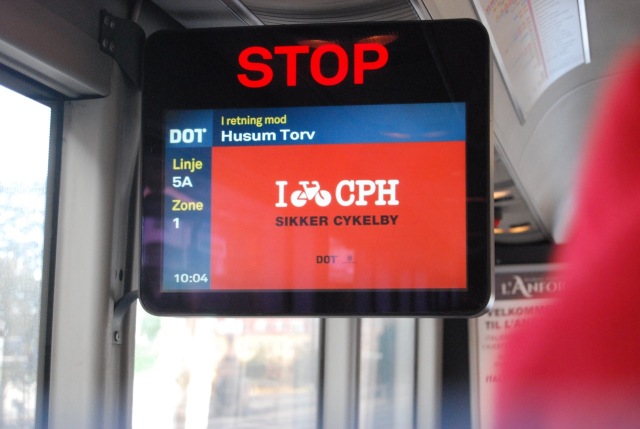 On the Bus to Simone’s

We spent a delightful couple of hours eating, drinking mimosas, conversation moving back and forth across the table. It was fun to watch Simone interact with her Mom, a relationship like so many others, loving but with some give and take. Simone had some chores to attend to in the afternoon, Mom and boyfriend had a long drive back to their home up north, and so we broke up around 2pm with Dillon, Bev and I heading out into a glorious afternoon for a boat tour and hike up to the top of the Round Tower. We’d put off these two activities until this day as the forecasts implied this might be our one good day of weather.

Breakfast at Simone’s with Her Mom

We hopped on the bus back to Norreport Station, and then started walking towards the harbor at Nyhaven (New Harbor). Established in 1670 it is a recently gentrified sailors quarter with trendy cafes, jazz clubs, and tattoo shops, and is filled with glamorous old sailboats of all sizes, as historic sloops are welcome to moor here in this ever-changing boat museum. We arrived too late for the 2pm tour so opted to wait 30 minutes for the next one and grab a cup of coffee from the wheeled cart adjacent to the boarding area.

Canal Tour is a Bargain

We’d been lucky in Paris with the weather, it being warm with blue skies and this turned out to be our one good day in Copenhagen, chilly but not cold, clear skies and dazzling sunshine. We purchased our tickets at an unbelievably low price of 40 Krone apiece, only $18 or so for the three of us. We grabbed seats in the back of the boat and settled in for a well thought out and narrated ninety-minute tour of Copenhagen’s harbors and canals.

We sailed past reclaimed military facilities (with a view of famous Christiana, which we would visit the next day), the Little Mermaid, Opera House, through the heart of Christianshavn (with some of the priciest real estate in town), the Bibliotek Black Diamond (a modern waterfront extension to the Royal Danish Library’s old building), around the very narrow Frederiksholms Kanal, stopping at Holmens Kirke to pick up and drop off passengers, before turning out into the main channel to finally return to home base back in Nyhavn.

We disembarked and made our way back towards Norreport Station to stop in at the Round Tower. Built in 1642 by Christian IV, the tower connects a church, library and observatory (the oldest functioning observatory in Europe with a ramp that spirals up to a fine view of Copenhagen. We walked up to the top, made a circle or two around the perimeter, quickly checkout the observatory and descended to street level after a brief stop at the book store/souvenir shop. 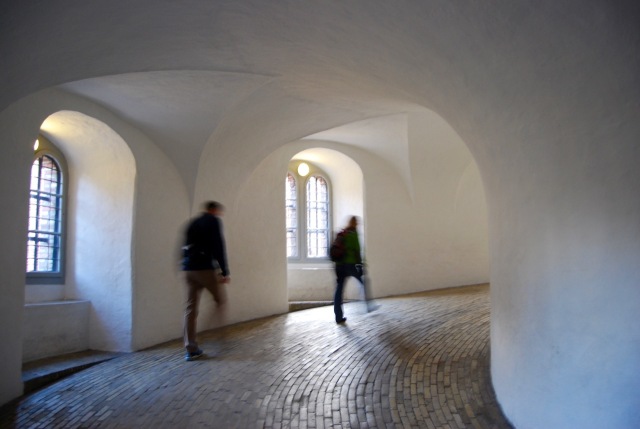 The Ramp to the Top

It was getting late in the day and we’d promised Maria and Gorm we’d back for dinner. Dillon went on his way to spend a quiet evening with Simone as we planned to meet them the next day for a tour of the Copenhagen’s large cemetery and Christiana. We took our familiar train back to Vedbaek and the bus back to the house.

Waiting for the Train at Norreport

Bev Checking Out the Bus and Train Schedule

Dinner that night was another home cooked version of typical Danish fare, a cut of pork and boiled potatoes. Filling and hearty, it rounded out a fine day in town and we finished the evening with more conversation in the late evening, another delightful day in Copenhagen completed. 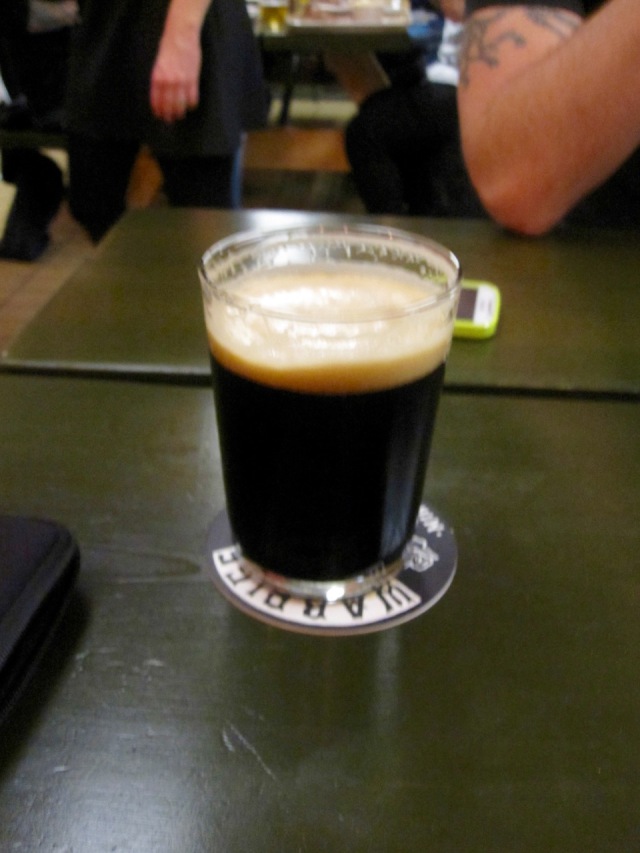