Our plans for an early start were sidetracked as we all slept in pretty late, given our post midnight bedtime the night before and the long tiring day that preceded it.  Bev’s knock on or door roused Francois and I around 9am and within a short time, we’d showered, dressed and prepared for another day out in Paris.

We’d passed on the 6 Euro breakfast offered by the Avenir (it actually didn’t look too bad for the price) and instead walked a block or so to a small boulangerie at the corner of Rue du Dunkerque and Rue Gerando.  Faced with an array of delectable looking pastries, I instead opted for a Croque-Monsieur, the French version of a hot ham and cheese sandwich.  This one featured mild ham and Gruyere cheese placed between two slices of toasted brioche style bread, then warmed in an oven with a sauce of Gruyere and mustard melted over the top.  I don’t recall the cost, likely 3-4 Euros; it was worth every bit of it, putting our fast food to shame. 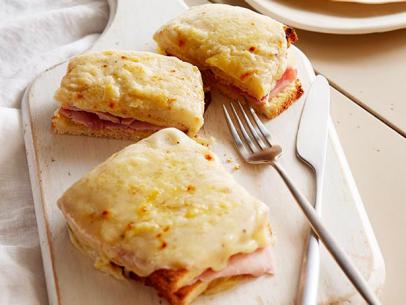 Simone had marked out a few sights she specifically wanted to see in Paris and after the Eiffel Tower, the first of these was the market of Marche Beauvau near the Bastille.  The inside portion of the market had been damaged by fire limiting the number of stalls that could be occupied by vendors but outside the it stretched for nearly three blocks, the fruit and vegetable stands a riot of color and texture.

After walking to the end, Francois and I each grabbed a cup of coffee and then made our way back through the stalls to the covered section, stopping along the way to pick up two kinds of ham (Blanc and Serrano), two cheeses (goat and a mild French), and some cherry tomatoes.  We left the market area, stopped at a boulangerie for two fresh baguettes and finally locating a Dia supermarket picked up some beer.

We’d passed a small park on the way to the Dia and returned to find an open stone table with four small bench like seats and sat down to picnic on a beautiful fall afternoon.  After an hour or so of eating and good conversation, we cleaned up, left the park and found the nearest metro stop for a ride up to the stop at Charles de Gaulle – Étoile.

We came up to street level and as always, that first glimpse of the Arc de Triomphe standing in the middle of the Place Charles de Gaulle, multiple lanes of traffic circling around to enter or exit from any one of the fourteen streets that lead into it is initially overwhelming.

Crossing over to the top of the Champs-Elysees, we stopped to have our picture taken and then began a leisurely stroll down this iconic boulevard.  Given how reasonable the prices in France seem to Simone and Dillon compared to Denmark, we spent most of our time stopping in at various shops along the way.  I did pop into a couple of the car dealer sites including Mercedes, Renault and the most extensive, Citroen, which featured models from its long history of auto making.

The Past and the Future

At the end of the shopping portion of the Champs-Elysees, we spent an extended amount of time in the large Adidas store where Dillon looked for a football jersey suitable for his team back in Copenhagen.  We then proceeded down the boulevard through the large park the contains the Grand Palais and the Petit Palais, grabbing a large beer from a kiosk to share with the group as we walked.  Finishing up at the Place de Concorde, we got a good look at the obelisk Napoleon brought back from Egypt.

We’d talked about taking a boat tour of the Seine, but Simone and Dillon wanted to do some more shopping and we all agreed that Francois and I would return to the hotel, stopping to pick up some supplies for a cocktail hour when they returned prior to heading out to dinner.  He and I jumped off the metro a stop before the Avenir and found a small market where we purchased some beer, a bottle of Ricard Pastis and a couple of bags of potato chips.

Upon our return to the Avenir we started on the Ricard and put a pretty good dent into it by the time the rest of the party showed up, shopping satiated for the weekend.  An hour or so followed of drinking, conversation and the two bags of chips being demolished while we did some research on where to go for dinner.  We had hoped to meet up with Lisa and Axel, Francois’ daughter and son who’d gone down to Burgundy to visit their uncle Jorq, but their train was delayed and we ended up missing them.

We settled on a place just a couple of blocks away with good reviews in Trip Advisor, Le Ptits Gros, made a reservation for 7:00 pm, and finished up the last of our snacks and beverages.  The walk over was invigorating, the slight coolness of the night helping to cut against the buzz we’d created drinking the Pastis.  It was crowded when we arrived, all of the tables outside full and ours inside just about the last one open.

We started with a round of drinks, for me a beer and others opting for the specials that night, Bloody Mary’s for about 5 Euros.  We placed our orders with Francois and I choosing the house steak, which came medium rare along with fried potatoes, a delicious cut of meat for a very reasonable 22 Euros.  Simone and Dillon each had a burger while Bev’s choice escapes me.  All in all, the five of us dined and drank well for a total of 135 Euros, a shade over $150 or roughly $30 each.  Not bad for a dinner out in Paris.

With an early flight the next morning back to Copenhagen and two busy days under our belts, we turned in at a reasonable hour, arising with enough time to grab some chocolate croissants from the boulangerie down the street to consume on the RER B back out to Charles de Gaulle.  Francois and I bid each another adieu, not knowing when our next time together would be.  Being able to see him again so soon after our trip last year was a true bonus and so I begin to plan when we might make a visit to Montpellier.  Who knows when that might be? 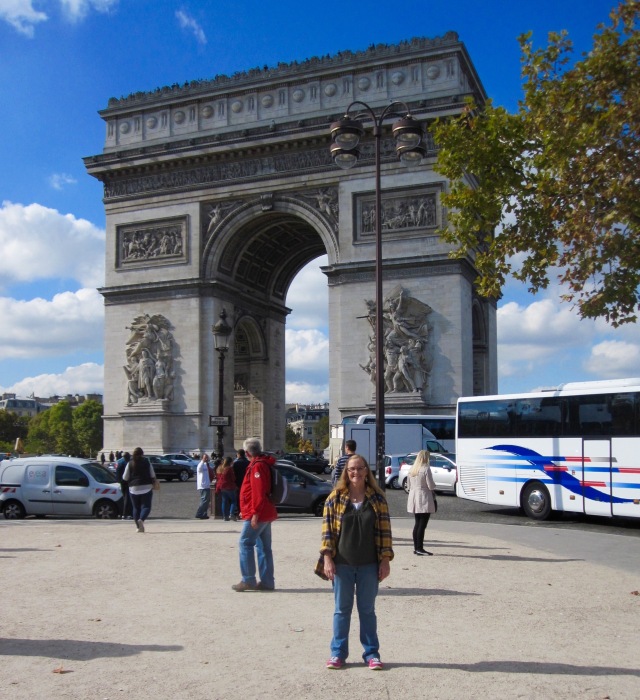 Bev at the Arc