One thing I neglected to mention in the previous post was our first item of business when arriving in Parikia that first full day, that is to book our ferry ride back to Athens on Saturday the 16, two days later.  As we entered the shop I thought I caught a glimpse of Jenny Manetta, but not being sure it was her, or just my imagination, I shrugged it off.  This would come back to haunt us later.  We arranged for the tickets at 69 euros for the both of us and selected the morning departure, as the later afternoon one wouldn’t get us to Athens until roughly 9pm.

The agent printed out the tickets and then noticed that they had done so for the afternoon sailing, so canceled the order and reprinted tickets for the morning, stapling the tickets issued in error to the back of the correct tickets.  Glad to have caught the error, we continued on our way for the walking tour of town.

After we left town, then toured and left the Butterfly preserve, we continued on our circuit around the island, peeling off to the eastern coast to check out the town of Piso Livadi, hoping that we might find the sand dune hilltop where Janice, Elfriede and I wild camped for a week in 1979.  We drove through the small town a couple of times, trying to match my memory with today’s reality to no avail.  Sometimes an area changes too much to allow a re-visit no matter how much we wish for it.

We drove on to Naoussa and after locating a parking lot, walked to the main square of town.  In 1979 the square was where the bus from Parikia dropped of passengers but in the intervening years the road had been redirected and now the area was for pedestrians only, a nice change.  The large tree that dominated the square was still there, but a yoghurt shop had replaced the Souvlaki stand I had frequented those four decades ago. 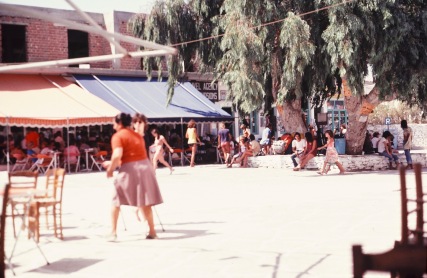 We left the square to walk around the harbor and up and down a number of the town’s narrow streets, which still shape my memories from 1979, checking out places to eat for later in the day.

We returned to the car and drove around the bay to the northern side known as Kolimbithres (Kolimpithres),

the area that Janice, Elfriede and I moved to for our last week on Paros.

It was here that I found what I was looking for, that is, places that fit my memory of them.  First and foremost was the taverna where we ate the bulk of our meals, located across the road from the field where we and a number of other folks wild camped. 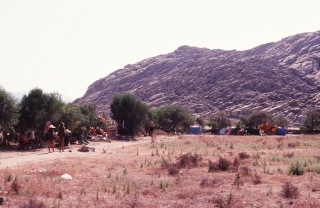 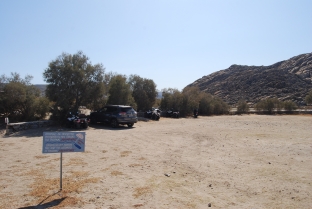 The field itself had changed some in that a small resort now took up part of the beach.  We parked there along with many other cars and after snapping some pictures of the taverna, walked down to the water and spent an hour or wading into the cool, clear, inviting waters of the bay.

After our dip, we drove inland in search of, and finally finding, Tao’s Center where Joanna would enjoy an hour-long yoga session while I sat on their patio with a beer and a book.  When we travel for long periods like this trip, Joanna and I spend quite a bit of time together.

We get along remarkably well, and our lives are so much richer for it, but these quiet moments alone allow me to spend some time in my own thoughts.  Often nothing meaningful is accomplished during this time, but the joy of spending it looking out at a bay, sipping on a cold beer towards the end of what has been a very good day is hard to beat.

Joanna finished her yoga class, happy to have been able to do an organized version of this exercise she likes so much, and we drove back to Naoussa for dinner.  We walked around the town again looking at menus and finally settled on a place we had passed a couple of times, Sigi Ikthios.  It was adjacent to a highly recommended joint whose prices would have sunk our budget, and so we were glad to be able to sit outside on a beautiful evening and enjoy our meal. 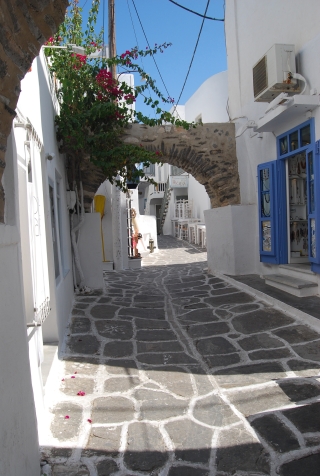 To be honest with you, I didn’t write down what we had that night and can’t recall what it might have been.  Over the course of our three months on this trip, we ate out more often than not and many of the meals blended into one, the food good but not memorable, mostly reasonably priced and almost always satisfying.  In this case what does come to me is the memory of one of our last nights on Paros in 1979.  Traveling with Janice and Elfriede was fun, but at that time in their lives they weren’t consuming much food and didn’t see dining as being that enjoyable, more a chore and I found eating with them to be a lonely experience.

A few days into our week we met Jan Lin, a young Chinese-American whose parents were diplomats in Washington D.C. and he became my eating and drinking buddy.  We found ourselves in town on August the 23rd, the date each year in Naoussa when they hold the Barbarossa Pirate festival, which commemorates the invasion of the town in 1537 by the famous pirate of that name.  Locals re-enact the invasion with a fleet of torch lit fishing boats which is followed by an impressive fireworks display.

We drank quite a bit that night, but I still distinctly recall the lighted boats coming into the harbor.  I’d been on the road for almost three months, really had been on the road for a couple of years starting with my first trip to Europe in 1977 and that night represented one of the last of two years of roaming.  I’d finish the trip just after Labor Day weekend, return to Los Angeles and begin the life that has brought me to today and this blog.

The Beach at Kolimpithres Looking at Naoussa

So that’s what I was thinking of and remember about that dinner that night at Sigi Ikthios.  Not the food, but the fact that I got to return to that place from 1979 with the love of my life, Joanna, and see it through the eyes of who I’ve become.  The lesson here is that while chasing memories is valuable, it is important to appreciate that you are creating new and better ones at the same time.  Let your new motto be ‘making tomorrow’s memories’ and live life to its fullest.