As planned we hit the pavement early for a day of sightseeing, using a walking tour provided in a Montreal guidebook I’d purchased.  We walked for a mile or so towards the St. Lawrence River and once we reached Place d’Armes (which contains a monument to Paul de Chomedey, founder of Montreal)

stopped in at Xavier Artisan, a nice-looking bakery/coffeehouse, for a late breakfast. 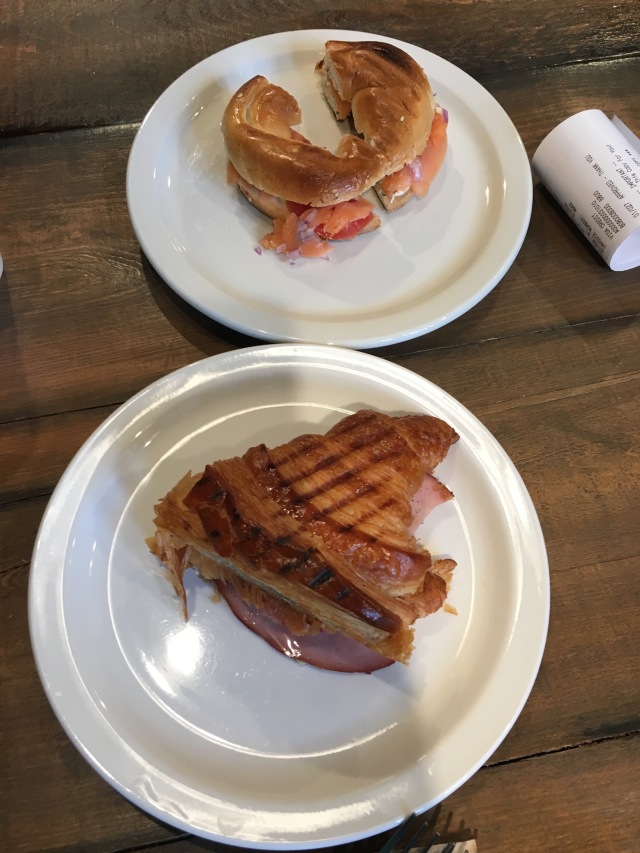 Splitting a quite good Black Forest Sandwich and Lox on a bagel along with a cappuccino and filter coffee for 19.3C, revived we went across the Place for our first stop of the day, the Basilica Notre Dame. 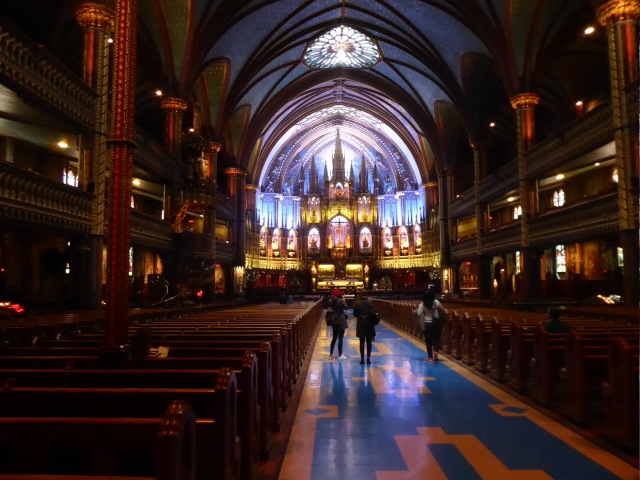 O’Donnell’s pride in his creation caused him to convert to Catholicism, allowing him to be buried inside the church he came to identify with so closely.

Exiting the Basilica, we continued walking westward through the historic heart of Montreal, founded here in 1642, until we reached the Centre d Histoire de Montreal, a former firehouse now housing exhibits on the history of the city.  Established in 1983 by the Archaeological and Numismatic Society of Montreal, it became part of the City’s network of cultural centers in 1987.

On the ground floor, the permanent exhibition, “Montreal en cinq temps” (Montreal in Five Stages) promotes the events, places and residents that have made history.  It includes reproductions of old maps, many photographs, and a varied collection of unique objects. Visitors also have the opportunity to view film clips and hear songs and stories. 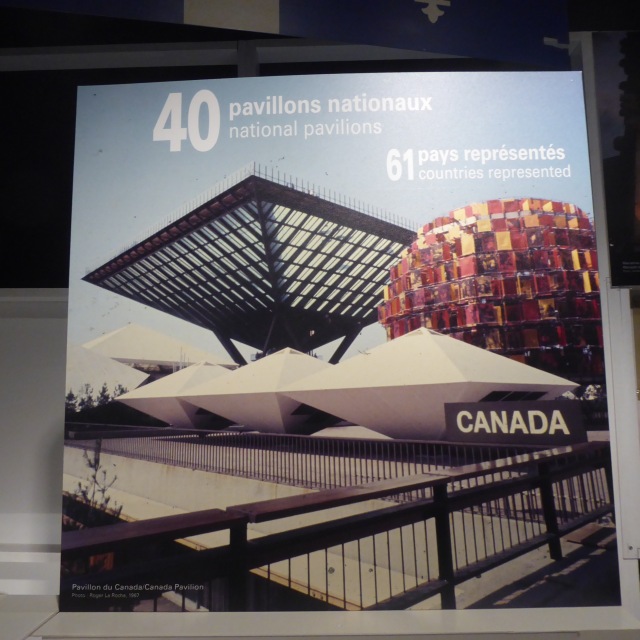 The top two floors feature temporary exhibits and the one we got to view was Explosion 67, which marks the 50th anniversary of Montreal’s World Expo in 1967.

One of the Exhibits

Through numerous static, video and moving exhibits, it presents an accurate portrait of the era through the experiences and “first times” experienced by teenagers and young adults at the Montreal World Expo and in the more hectic years that followed.

It was a very thorough and entertaining visit and after a couple of hours we’d pretty much covered all of the facility.  We walked down to the riverside and back east towards the area known as Vieux Port, home to the freighters and cruise ships that moor in the city.  Still used as a port, some of the docks (quai’s) are being re-purposed into entertainment zones.

Ferris Wheel on the River

At the end of the zone, we turned and headed north to the Marche Bonsecours.  Built between 1844 and 1847, for more than 100 years it was the main public market in the Montreal area.  It also briefly accommodated the Parliament of United Canada for one session in 1849 and is now used as a produce market, art gallery, concert venue, reception hall and shopping mall. 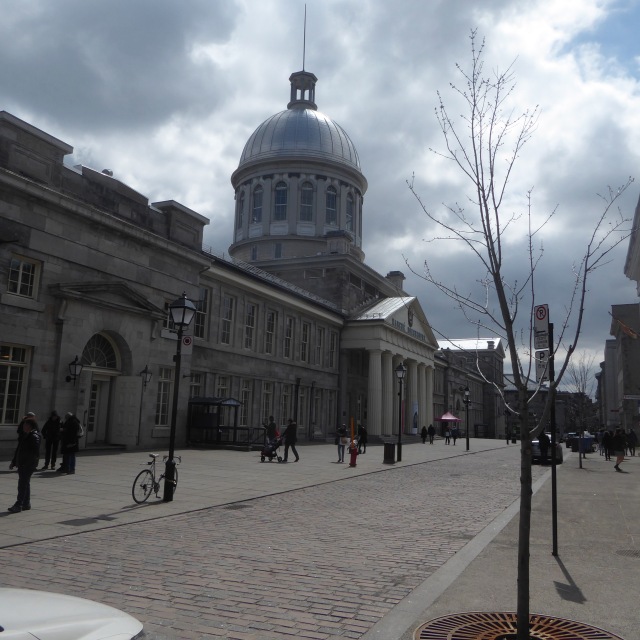 We stopped in at Café des Arts for a snack, for me a latte and pastry of some type I can’t recall, only that it was filling and good. 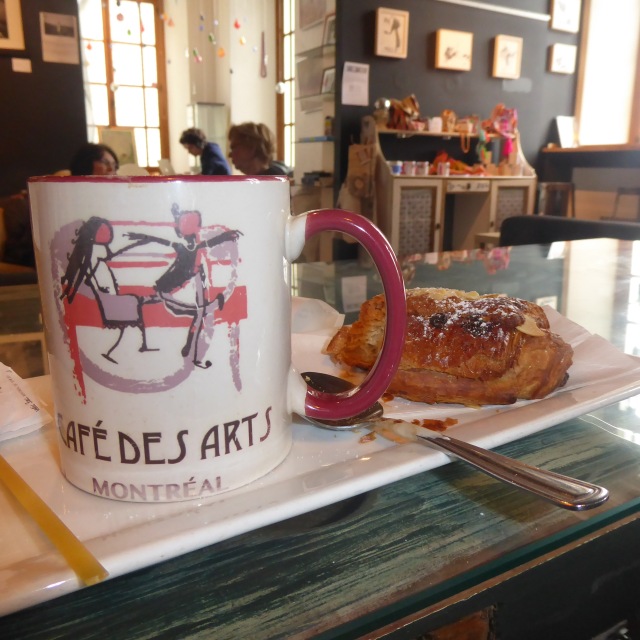 As we left to head back up to the Airbnb, we stopped to take a picture of of Hotel de Ville, Montreal’s city hall before completing what would end up being about five miles of walking that day.

We made a stop at a very nice local market to pick up supplies for breakfast the next morning and after returning to the apartment killed time waiting to hear from Dillon’s friends from Copenhagen who were also in town for the wedding.  First and foremost, of these was his good buddy from their mutual hometown in Kansas (Iola), Robert, who had moved to Denmark to play American style football, married a local girl and had made a new home for himself there with her and their two young children.  It was her parents that Bev and I stayed with when we visited in 2015.

Early in the evening we heard from Robert that he and Edgar, a Spaniard now living in Copenhagen, would meet us at La Banquise, the restaurant we’d seen the long line for the prior evening.  It turns out that Edgar had lived in Montreal for a few years and was familiar with the place.  It seems the restaurants popularity stems from it being open 24 hours a day and having a varied and reasonably priced menu including thirty-one variations of Poutine. 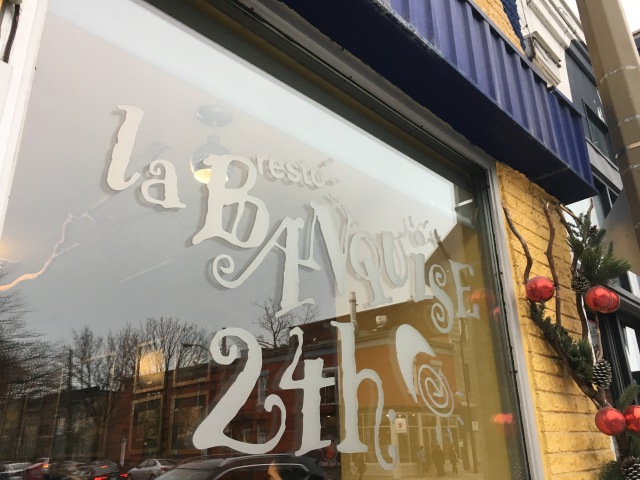 Dillon and I arrived early and took our place in line and after we actually got inside, and a table was ready, Robert and Edgar hadn’t arrived yet, so we stepped aside and watched a couple of happy parties get seated.  Soon enough the two laggards arrived, and we were placed at a table for four street side.  The other three ordered a small poutine apiece, but between the one I had the night before and curiously, having enjoyed one with Joanna at Growler’s Pour House in Charlotte a week earlier, I kind of reached my limit and instead opted for a burger. 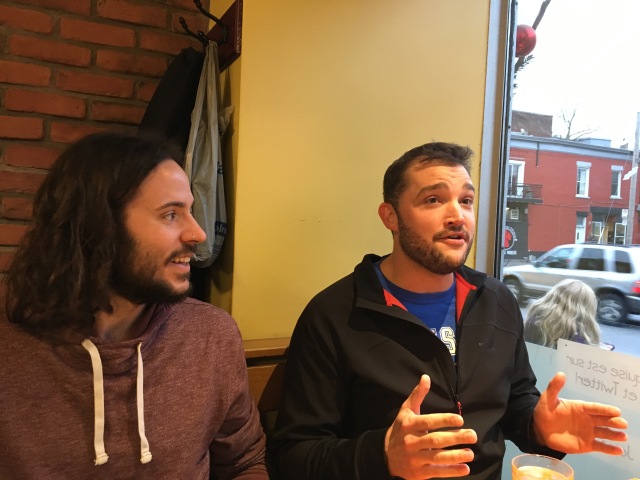 Once done with eating we journeyed across the street to Pit Caribou to finish out the evening.  It was interesting to spend the time listening to Dillon and Robert, two very good friends who’d not seen each other in a while, get caught up while Edgar interjected occasionally.  The beer was as good as the night before as an hour or two seemed to evaporate in no time and we soon found ourselves in the cold night, making our way back to our respective lodgings.

It had been a long but good first day in Montreal; with the wedding on tap Dillon and I planned to walk to Mont Royal the next one and then get ready for the big event.  It was shaping up to be an entertaining and memorable weekend. 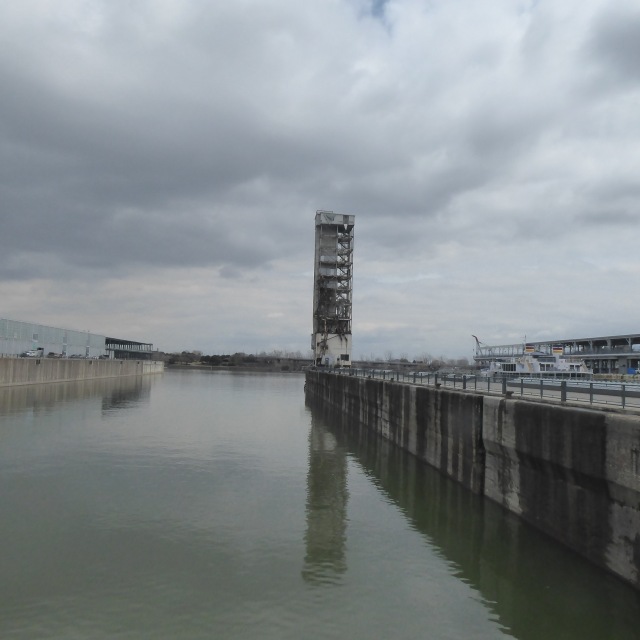