The plan for Monday was to hang out in the morning, then head into downtown Las Vegas to tour the Mob Museum, grab a bite to eat and make it to my doctor’s appointment at 4pm.  We’ve made a habit of visiting museums such as this one (Spy in Washington, East German in Berlin, Rock and Roll in Cleveland, etc.) and it would not be disappointing. 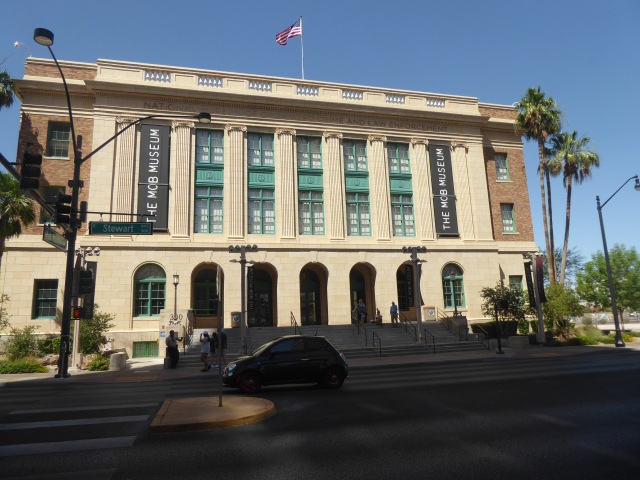 Opened in 2012 and housed in the former Las Vegas Post Office and Courthouse, which was built in 1933 and is listed on the National Register of Historic Places, it traces the history of the mob in the United States generally and in Las Vegas specifically.  My take away from it was that the single compelling incident that fueled the rise of the mob, or organized crime as we know it, was the implementation of Prohibition.

Among the many interesting exhibits is the second-floor courtroom, which was the location of one of fourteen national Kefauver Committee hearings to expose organized crime held in 1950 and 1951.  The museum also acquired the brick wall where the Saint Valentine’s Day Massacre took place in Chicago in 1929.

As we exited the museum through the basement speakeasy (they house a distillery there) and passed through the gift shop, trying on some gangster appropriate clothing, we decided to grab a bite to eat before heading to my doctor’s appointment.  The downtown area of Las Vegas, in its early days the center of the gambling universe, was eclipsed by the strip and over the years became run down, a place best to be avoided.

Over the course of the last decade or so, efforts have been made to revitalize this area and we walked from the museum onto one such street, North 3rd, and entered the Triple George Grill for what we hoped would be a quick meal.  It’s an old school styled restaurant and we were seated in a walled booth, one of many, for a very good lunch that would have better if we could have spent more time on it.

We’d erred in thinking how much time we had to spare and ended up having to rush the service, a shame as this is the type of place you want to linger over the meal.  Joanna ordered and thoroughly enjoyed their Downtown Rueben (corned beef, sauerkraut, and 1,000-island on marble rye) while I got a special, Pasta Primavera (multiple vegetables in a red sauce), portions large enough that we each only ate half and took the rest home with us.

We paid our bill and scurried back to the car, rushing to get to the appointment on time, which we did with minutes to spare.  I met with Marty’s doctor who after examining the knee felt the same as my doctor, that I hadn’t torn anything but if it would make me feel better, would order an MRI for me, which was scheduled for the next morning, read the results and let me know the outcome before we left for Southern California in a day or so.

That next day Joanna and I drove over to the imaging lab for the short procedure, a relatively innocuous one as long as you don’t mind being shut up in a small dark space that emits loud clanging noises (I don’t) and then stopped to pick up groceries for the dinner we’d make that night at the house, a Lamb and Bell Pepper concoction we’d had success with.  It is easy to make and the combination of lamb and red and yellow bell peppers is a marriage made in food heaven.  Here it is:

One 15-oz can whole peeled tomatoes, crushed by hand

Cook lamb, stirring and breaking up meat into small pieces, until browned, 6 to 8 minutes. Add bay leaves and garlic, and salt and pepper to taste. Cook until garlic is golden, 2 to 3 minutes. Stir in wine; cook until reduced by half, 2 to 3 minutes. Add stock and tomatoes; add more salt and pepper if needed. Bring to a simmer; reduce heat to medium-low and cook, stirring occasionally, until sauce is slightly thickened, 35 to 40 minutes. Stir in peppers; cook until peppers are tender but not falling apart, 4 to 6 minutes. Discard bay leaves.

Meanwhile, bring a large pot of salted water to a boil. Cook pasta al dente, 10 to 12 minutes. Drain pasta and transfer to pan with sauce. Using tongs, toss pasta to coat. Divide pasta between bowls; garnish with pecorino. Serves 6 to 8.

Dinner went well and we passed the evening in conversation mixed with a bit of NBA playoff basketball, anticipating the arrival of Doug (aka the Griz) and his wife Sharon fairly early the next day as they would just be driving in from St. George, Utah.  After their arrival, we drove out to Hoover Dam to park and walk onto the Hoover Dam Bypass, formally known as the Mike O’Callaghan–Pat Tillman Memorial Bridge.

Trailhead at the Bridge

Opened in 2010, we can recall its construction during a number of our prior visits to Las Vegas to visit my aunts and uncles.  This structure is a marvel, the first concrete-steel composite arch bridge built in the United States, incorporating the widest concrete arch in the Western Hemisphere.  At 890 feet above the Colorado River, it is the second highest bridge in the United States after the Royal Gorge Bridge and is the world’s highest concrete arch bridge. 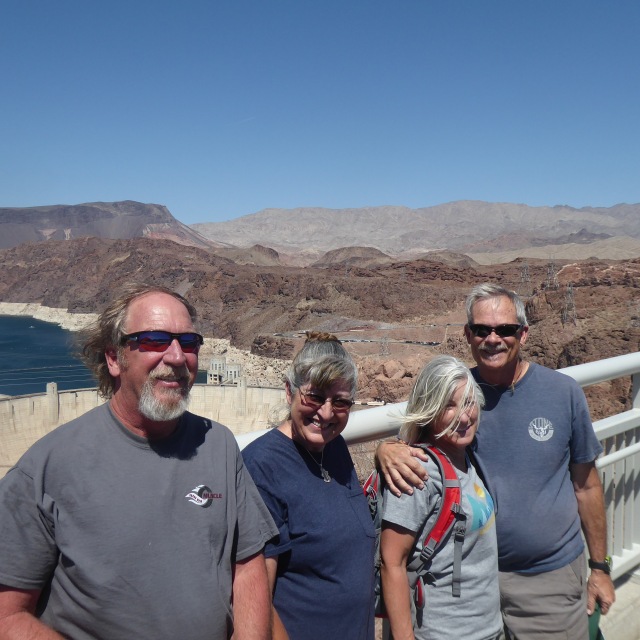 We parked below and walked up a series of ramps and out across the river, holding on to our hats in the strong winds that were blowing, making walking against them a difficult task and the journey back much simpler as it acted like an effective tailwind.  We returned to the car and just as we entered the parking lot my cell phone rang; it was the doctor’s office.  Could I stop by in 25 minutes to talk to the him and get that steroid shot he’d talked about? 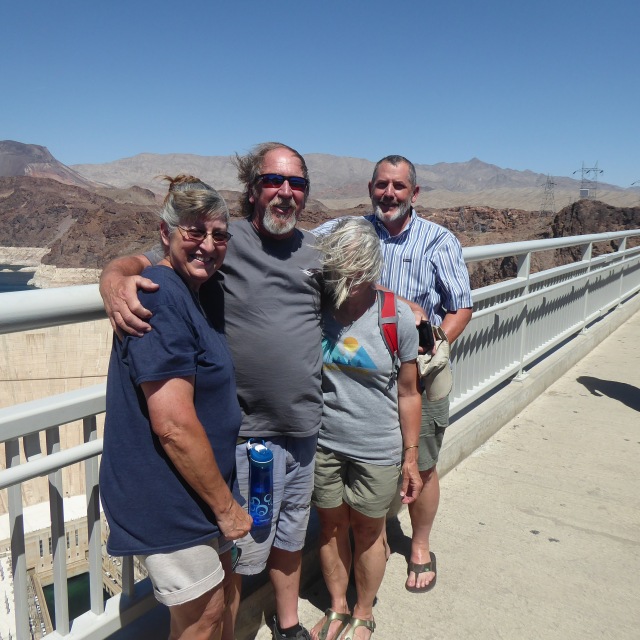 Could I?  We all hustled to the car and again, made it to the office just in time; Joanna followed me into the exam room and there we were told there was no tear, just arthritis and a shredding of the meniscus, all kind of normal for a knee that has borne much physical activity in its lifetime.  Enduring the shot was worth the relief I knew it would bring and we all then had a reason to celebrate that night at dinner, knowing I just needed a bit more time to fully recover.

We’d leave Henderson the next morning for Solana Beach and the annual reunion of the Cisco’s, I with a lighter heart than the day before.  A good trip had become much better and now would be seen to its conclusion as planned.  It was a good day.