I finally got some sleep that night and awoke the next day in about the same condition, so we resolved to head over to Key West to an urgent care unit, fulfilling my unofficial goal of visiting such a facility or emergency room in each state.

Unlike our recent experiences in rural areas though, this site was crowded, full of folks who were outwardly suffering, one woman so much so that she was immediately sent to the local hospital.  After our obligatory wait I received a cursory examination, was prescribed a muscle relaxer and steroids and sent on my way. 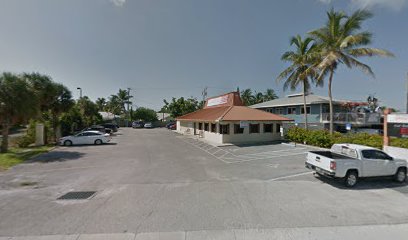 We then spent an entertaining 45 minutes at a nearby CVS getting the prescriptions filled, the line in front of us a rare opportunity to examine south Florida’s citizens and their antics.  We returned to camp and I spent more time sitting at the common area while Joanna took off on her bike (that lucky girl) for Key West to visit Fort Zachary Taylor and then the Southern Most Point in the Continental United States.

Construction of the fort began in 1845 and it was named for President Zachary Taylor in November 1850, a few months after his sudden death in office.  With five-foot thick walls, its foundation consists of limestone and New England granite.  At the outset of the U.S. Civil War, Union Captain John Milton Brannan, moved his 44 men of the First U.S. Artillery from Key West Barracks to Fort Taylor. His orders were to prevent the fort from falling into Confederate hands.  The fort then became a key outpost to threaten blockade runners. 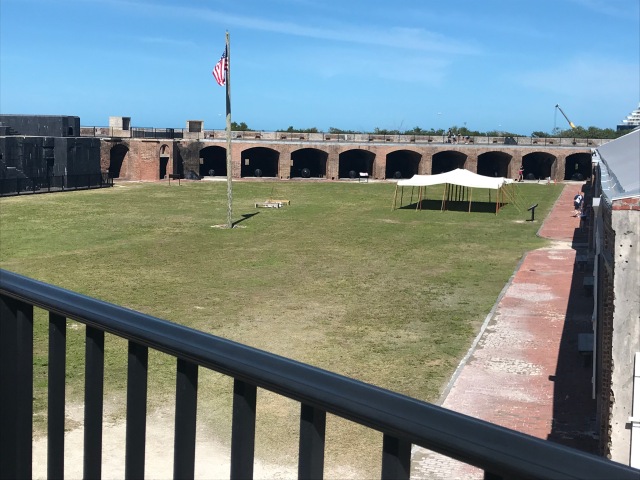 Heavily used again during the 1898 Spanish–American War, World Wars I and II, and the Cuban Missile Crisis, in 1947 the fort, no longer of use to the U.S. Army, was turned over to the U.S. Navy for maintenance.  In 1968, volunteers excavated Civil War guns and ammunition buried in long-abandoned parts of the fort, which was soon discovered to house the nation’s largest collection of Civil War cannons.  Fort Taylor was then placed on the National Register of Historic Places in 1971 and designated a National Historic Landmark in 1973. 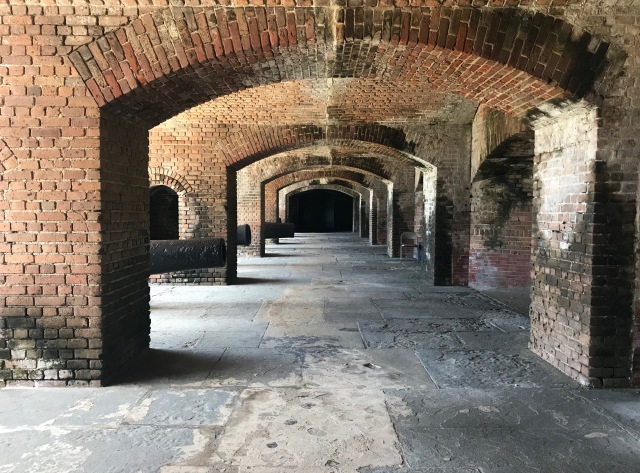 After Joanna returned, we drove to a nearby a Publix to pick up supplies for dinner in camp, our first such meal of the trip.  We kept it simple, a box of fancy Kraft Mac and Cheese (the kind with the cheesy sauce in the box) with vegetables mixed in and a bottle of white wine to wash it done with.

The next day, our last in Key West, we hung out around camp and in the early afternoon drove to the Tropic Cinema again to catch an afternoon movie.  With some time to kill, we popped into Glazed Donuts next door for a large latte and a Cream Bullseye donut, a nice way to prepare for the afternoon ahead.  Curiously, as well as I recall the Peter Jackson movie from two days before, I can’t remember what we saw that day.  It’s funny how our memories work, something remaining vivid while other incidents recede into the fog.

Leaving the theater, we drove down to the waterfront and parked outside the Waterfront Brewery, anticipating a nice meal and cold brews.  It wasn’t too crowded, and we were seated promptly, our waiter friendly and engaging throughout our meal.  I started with their Belgian Tripel and Joanna a honey blonde ale.  For food, we split a bowl of the Bahamian Red Conch Chowder (conch & clams) and the Shrimp and Scallop Risotto, which I finished with a double IPA.

The food was quite good and a great way to complete our Key West experience, even though my ability to fully enjoy it had been severely compromised.  Our timing for the meal was spot on, as the sun began to sink while we ate, and so I ducked out onto the dock next to the brewery to take a couple of pictures during its descent to mark the beauty of this attraction that locals and tourists alike love to view. 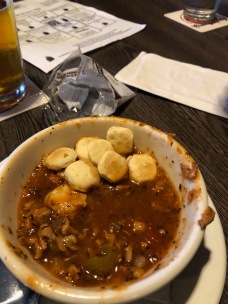 And so, we closed out our time in Key West, not the experience I had hoped for and yet, despite the physical discomfort an environment so inviting we vowed to return some day and enjoy it to the fullest.  Perhaps in a few years if and when we start RV’ing, I could envision a month in the Sarasota area, a month in the Keys and another month in the Orlando area.  Then we’d truly be considered snowbirds.