Our next day in Henderson would be a full one, starting with dropping off the BMW at the dealer to replace a burned-out driving light.  Leaving it until later in the day, we all made our way to one of the highlights of the weekend, Meow Wolf’s Omega Mart.

It is housed at Area 15, a large experiential retail and entertainment complex located one mile west of the Las Vegas Strip that includes sculptures and other art displays, as well as alcohol outlets, a restaurant and a main hall known as The Spine, which is 80 feet wide, 300 feet long, and 32 feet high and lit with black-lights and neon colors.

Other attractions include Oddwood, an indoor bar with a giant, artificial Japanese maple tree, Birdly, which simulates the experience of flying over large cities, an indoor axe-throwing lounge, an ice cream shop, and the Haley’s Comet zip line ride, which travels through the Spine. 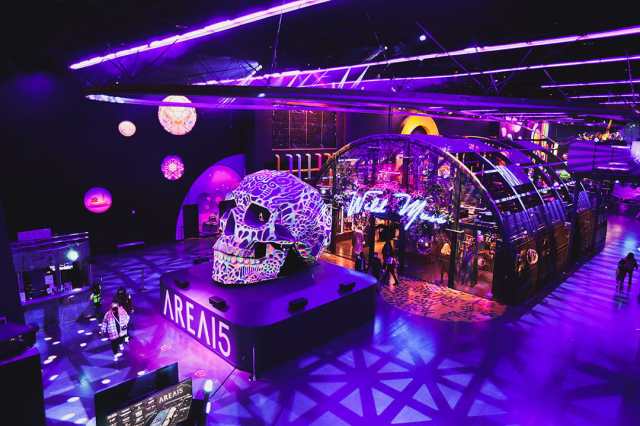 Our destination was the Omega Mart, imagined and produced by Meow Wolf, an American arts and entertainment company founded in 2008 that creates large-scale immersive art installations and produces arts and music festivals, music videos, and streaming entertainment.  Its first, and flagship attraction, House of Eternal Return in Santa Fe, New Mexico, is a 20,000-square-foot facility, which used to be a bowling alley where Sophia Diaz grew up, that includes an immersive art installation, learning center, and concert venue.  They opened their second installation, Omega Mart this year and expect to open a third in Denver later in 2021.

We purchased our admission and entered the Mart, a division of Dramcorp, to explore the first ‘exhibit’, a supermarket full of incredibly imaginative and detailed fake products, most of which have an ingredient included in them called ‘Additive S.’  The more time you spend exploring the entire complex the more you learn that ‘s’ stands for source.  And it starts to pull you into the larger narrative of the show, which is about ‘source energy’ being combined with these products to make them impossibly satisfying when you use them.

As you wander through the store admiring the ingenuity displayed, you notice that a bank of fridges storing drinks become passageways to the rest of the space, full of hedge mazes, multistory rock canyons with projected imagery, glass that seems to come alive with animation and corporate factories with robot receptionists.  And slides.  Yes slides. 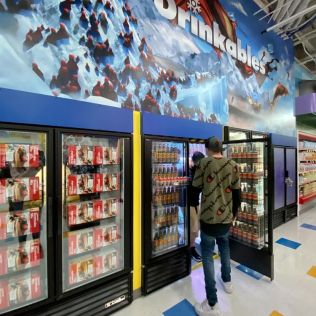 We spent over three hours visiting as many of the over sixty individual rooms and only scraped the surface of what is available to interact with.  More than 325 artists, from Las Vegas and abroad, collaborated on the project and the level of detail is so comprehensive, it would take dozens of visits to see it all.

For example, I sat in the Omega Mart employee break room for quite some time and watched in their entirety a number of training videos for new employees, including one on how to handle different kinds of spills depending on how dangerous the substance is that comprises the spill.  Later I stumbled upon what is supposed to be the corporate office of Dramcorp, sat down at the desk for Cecelia Dram, V.P. of Tomorrowment, and opened numerous files full of background information, some of it sinister in nature. 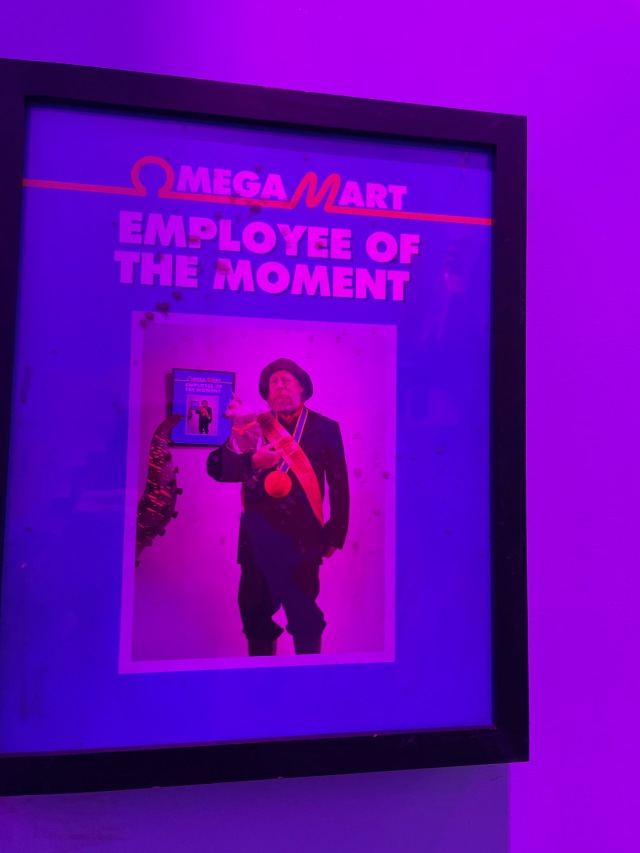 Employee of the Moment

We finally took our leave of the Mart, head’s spinning from the color, light, and overall overwhelming scope of concept, sure to return at some time in the future.  Hungry and thirsty after our morning pursuit of adventure, we headed a short distance to Main Street in the Arts District to drop into Nevada Brew Works.

There Joanna had a Lemon Drop Saison and I the Schwarzbier Lager and the four of us split a Supreme NBW pizza.

Cold Ones on a Warm Day

It was just the right amount of refreshment to hold us over to dinner that night, at Todd’s Unique Dining, one of our favorite restaurants anywhere.  Starting with a round of drinks including a Whiskey Smash for me, we split the Goat Cheese Wontons appetizer, served with a Raspberry Basil sauce, so good you could make a meal out of just this dish. 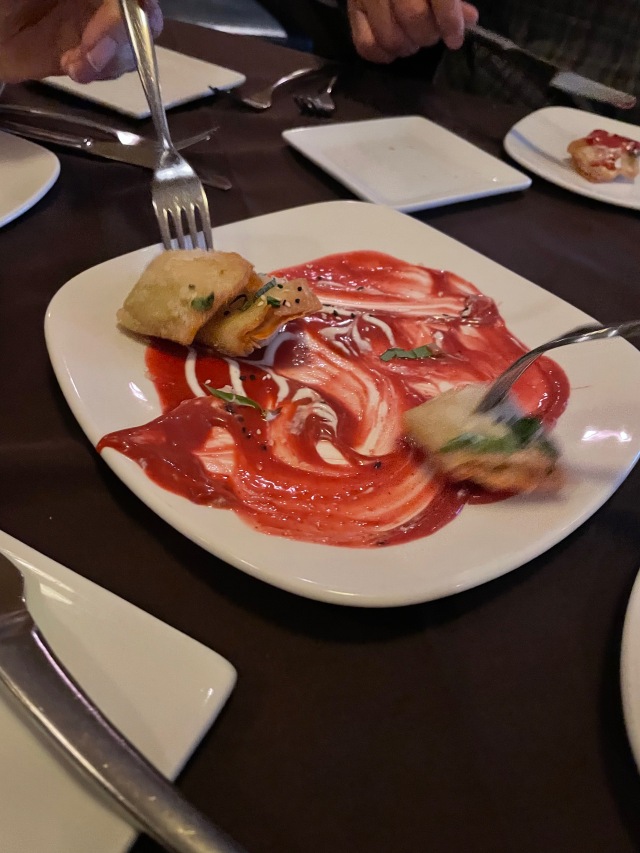 For entrees Joanna enjoyed the Togarashi seared Rare Ahi Tuna with Garlic soy butter, Kim the Jumbo Seared Scallops with Mushroom mashed Pistachio butter, Marty the Breast of Duck with Pomegranate demi and sweet potato puree, and for me, my usual go to, the Alaskan Halibut with artichoke and caper sauce and garlic mashed potatoes. 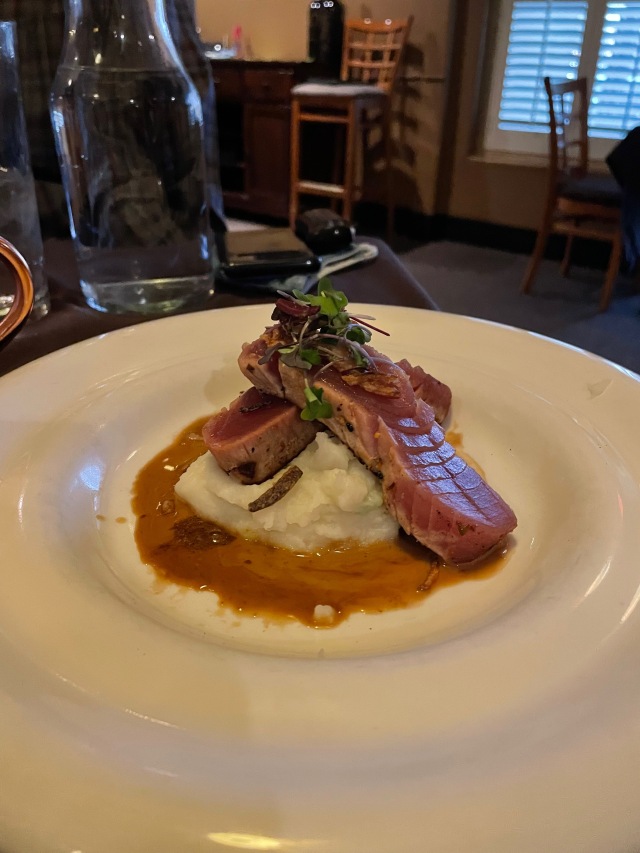 We split a cobbler for dessert, and with a Caesar Salad, Pear and Blue Cheese Salad, three cocktails and one glass of wine, the total came to $222 (not including the tip) a little over $55 per person, a remarkably affordable fine dining experience.  The balance of the weekend passed uneventfully, two hot outside to engage in physical activity, but we did attend a retirement party that evening for a family friend who had been a long time elementary school principal.

Being a principal is a tough enough job as it is, but when you add in dealing with the pandemic and a generally uncaring and unsupportive school system, she seemed quite happy with her decision to retire, leaving the system with one less highly competent and dedicated advocate for educating our children.

Sunday morning brought a small bit of adventure, when I hopped on Kim’s new pedal assisted electric bike for a seven-mile ride with Marty to watch his tennis teams (senior doubles) in a weekly tournament.  With pedal assist, there isn’t a throttle, and you can select which level of assist you want.  I rode without much at all and when beginning a short climb turned it off completely to gauge my effort, then kicked it back on to see how much help it provided, not surprisingly quite a bit even on a low setting.  I can see why both types of E-Bikes are becoming so popular.

The familiar four-hour drive home Monday morning went smoothly, with a stop in Barstow for our first In-N-Out experience in quite some time.  Even though we have many outlets close to home, we usually just stop at one when we are on the road.  Maybe that is why we travel so much? 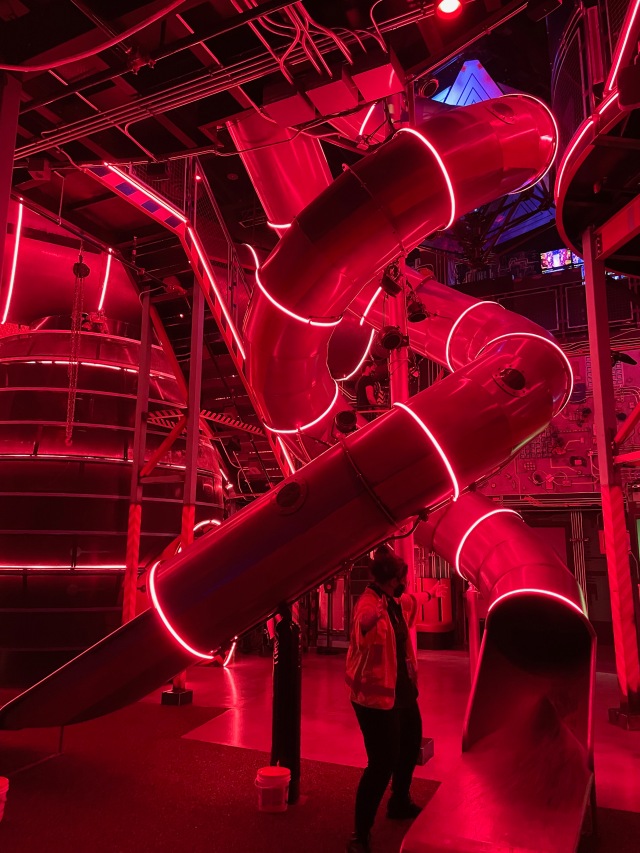