We took a taxi for 9 euros to the train station and found our two-hour train ride to Bilbao to be different than the others that preceded it.  Although the car was comfortable enough just like the others had been, the condition of the tracks was not and we found ourselves being bounced around a bit more than would make for a smooth ride.

We didn’t realize it but our train was running late and as we passed through a number of towns around and after the time we were supposed to have arrived we couldn’t help but experience a bit of trepidation.  Did we miss our station?  Our fears were alleviated a half hour later when, after winding our way through the outskirts of a very large town we landed at the Bilbao station, the last stop on the line. 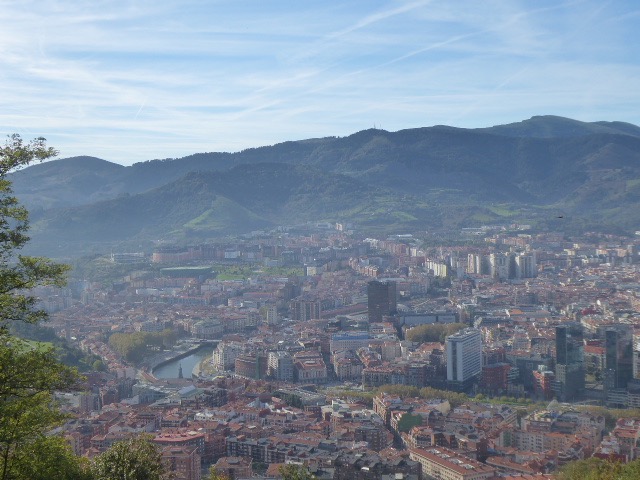 Bilbao is Larger than Expected

We sat on a bench for a few moments at the station to eat a bocadilla we’d purchased at the train station in Burgos, picking up a drink and chips at a Carrefour Express inside the terminal.  A short distance down the street we popped into the Tourist Information (TI) office where we picked up a map and discovered our lodging was a fairly easy tram ride away.

Bilbao and Our Walking Path

On the way to the Pension Arias, our home for the next two nights we noticed a handy market opposite the tram stop, one we’d put to good use.  Now came the fun.  The pension is located in a monolithic building with no external signage.  One must buzz on an indifferently labeled intercom to get into the lobby, and if lucky, locals downstairs will tell you to go up three flights of stairs to the landing where if you are again lucky, a pension representative lets you into your section of the floor.

At 44 euros a night, sometimes you do get what you pay for.  Actually, it wasn’t all that bad once we got over the hump of accessing the place.  Our room was clean, the bed comfortable, a convenient location.  This trip has made me much less demanding of lodging unless I’m paying a lot of money.  As we say when we eat non-descript food when camping, it’s better than a bug.

We set out on the tram back towards the train station, pretty much in the heart of town and across the Ria de Nervion (River) from the historic center, where we embarked on a walking tour provided to us by the map we had picked up at the TI.  Part way through the walk we stopped at a bar for drinks and a bite, a beer for me, a melted cheese sandwich and one of the best mojitos ever for Joanna. 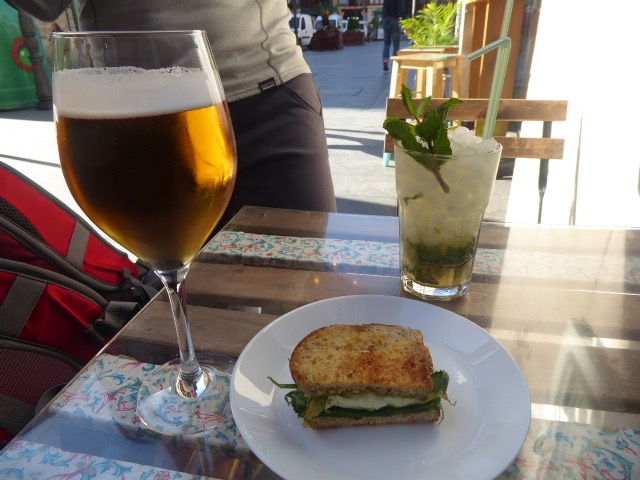 Tapa, beer and that Great Mojito

We resumed our walk and then returned to the Pension, where before turning in for the evening we stopped at Bar Restaurante K2, a Kebab place around the corner.  And there we put away a half chicken dinner, falafel in pita, beer and soda for the princely sum of 10 euros.

Chicken and a Falafal

The chicken was perfectly cooked, fried crispy exterior leading to juicy meat.  The falafel, as often happens here, comes soaked in multiple sauces and by the time you reach the last third of it you are wearing as much as you are eating.

With a full day ahead of us we were out early with a plan to walk in the morning and then arrive at 1pm for our scheduled entry into the Guggenheim Museum.  Following the 2nd half of the map tour we’d walked the day before, we found ourselves at Azkuna Zentroa.  Originally a wine house built in 1909, it was abandoned in the 1970’s but found new life in 2010 as a “Culture and Leisure Centre”, consisting of a cinema multiplex, a fitness center, a library, showrooms, an auditorium, shops, and a restaurant.

An amazing looking place inside, we stopped to take some pictures and resumed our walk, eventually crossing back over the river to take the Funicular de Artxanda to the top of Mount Archanda, one of the two mountain ranges that define the municipality of Bilbao, the other being Pagasarri. 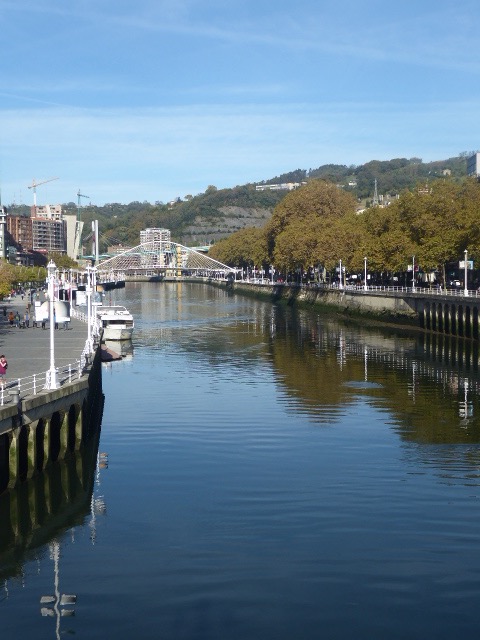 It is a long steep climb, so much so one is glad for the funicular.  At the top, we were treated to spectacular views of the city, ringed by its mountains, the river running through the middle, a truly lovely place.

We descended and walked quickly to the museum arriving just in time for our appointment and entered.  Not having had time to eat, our first stop was the museum café where we split two tapas and a drink, then proceeded to fill the rest of the afternoon with this one of a kind place.  Designed by Frank Gehry, it was inaugurated in 1997 by King Juan Carlos I of Spain. 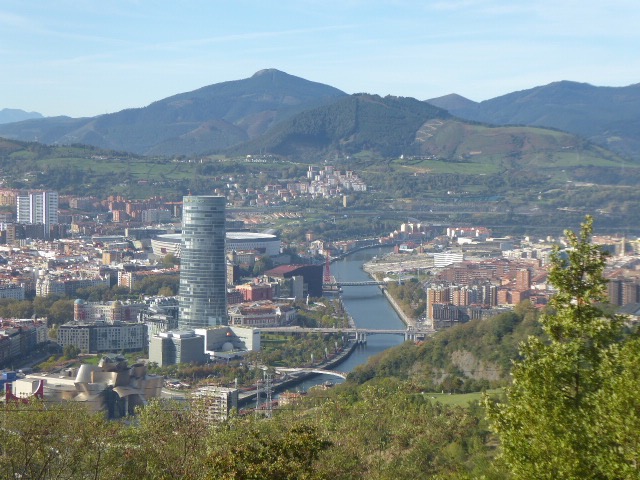 View from the Mount

It is an innovative building, as much a piece of art as its contents and consists of curvilinear and twisted shapes, covered with limestone, glass curtains and titanium plates.  Located on the banks of the estuary of Bilbao it blends in with its surroundings, blurring the line between indoors and out and what strikes the viewer the most is that it appears not to contain a single flat surface in its entire structure.

The museum hosts frequent exhibitions with works from the Guggenheim headquarters in New York, but has also been building its own permanent collection which include relevant examples of contemporary art from local and international authors, including Richard Serra, Robert Rauschenberg, Willem de Kooning and Yoko Ono to name just a few.  We are not connoisseurs of modern art and since much of what is exhibited here can be described as abstract expressionism, I will admit that I can’t quite understand what all of the fuss is about

We finished up our visit and walked back across the river in search of a highly recommended Mexican restaurant.  With some time to kill before its opening hour we stopped for a beer at a small bar and relaxed after a day of many miles of walking and museum shuffling.  We have found that when we are in tourist mode, particularly in Europe, utilizing public transportation and seeing the sights, we easily walk five miles or more a day.

We walked a number of blocks to the restaurant, finally locating it as the street numbering system here is, as with other European cities, not very regular.  Yes, odd numbers and even numbers are on opposite sides of the street, but they don’t match each other, that is numbers 10-22 might be in one block while across way the numbers might be 17-31.  When we arrived at the address, we discovered that the restaurant was closed for vacation.

Disappointed is a lighthearted description of our spirits but we soldiered on and walked back towards Pension Arias, eventually stopping at yet another Kebab joint for a filling burrito like chicken wrap and beer apiece for a total of 12 euros.  Sometimes you save the budget even if that isn’t your intent.

Another good night’s sleep would prepare us for a new adventure the next day, our first encounter with a discount bus service now serving Europe, Flix Bus, for our ride to Toulouse.  We’d scoped out the location where we would meet them, the Terminbus station just a couple of blocks away from the Pension so we felt reasonably confident that the next morning would go without a hitch.  But then again, who knows what adventure lies around any corner when traveling? 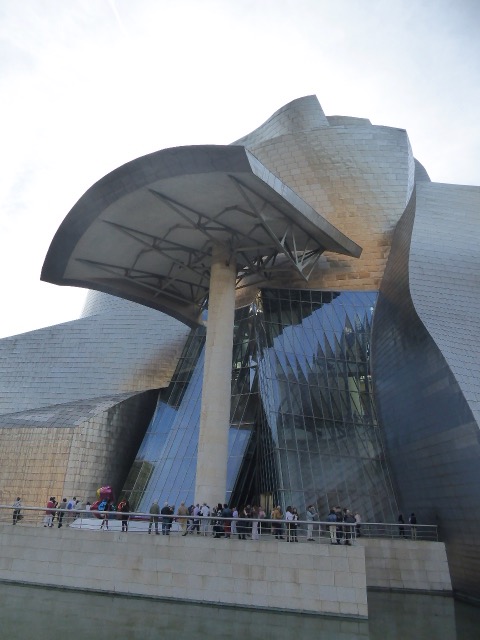