The next day we set out again for the State Capital but this time used Lyft to get us there and back.  As we approached the building, we noted a Planned Parenthood event to support this organization which depending on your point of view, performs demonstrably worthwhile services or is a tool of the devil. 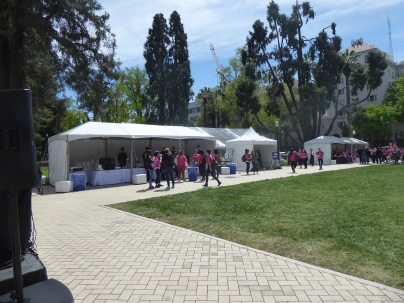 After clearing the security checkpoint we made our way to Room B-27 in the basement, headquarters for the California State Capital Museum to check in for one of the free tours conducted daily on the hour from 9 am to 4 pm.

We met our guide in the middle of the basement, at the bottom of the Rotunda where we admired Arthur Mathews mural, the “History of California and from there ascended to the first floor where we stopped in to see the restored historic offices of the Secretary of State, Treasurer, and Governor of California. 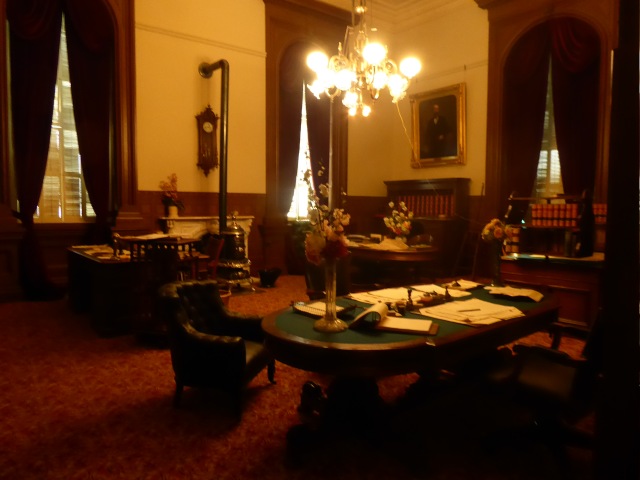 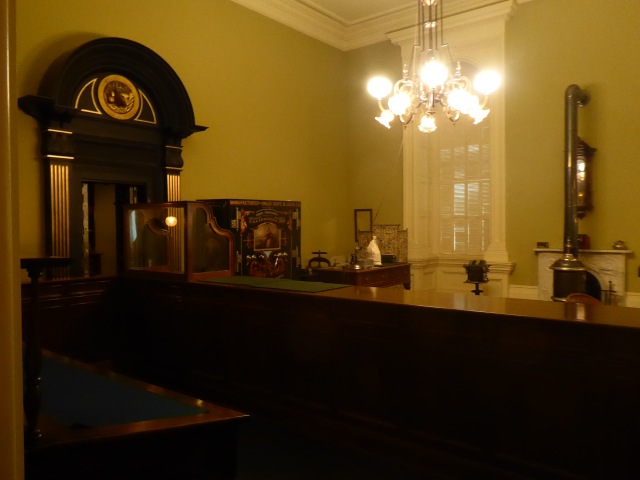 In the center of the rotunda stands the marble statue, “Columbus’ Last Appeal to Queen Isabella,” sculpted by Larkin Mead, which was brilliantly lit by light from the building’s dome.

From there we ascended to the second floor to take a look at both Senate and Assembly chambers, both vacant as neither body was in session that day. 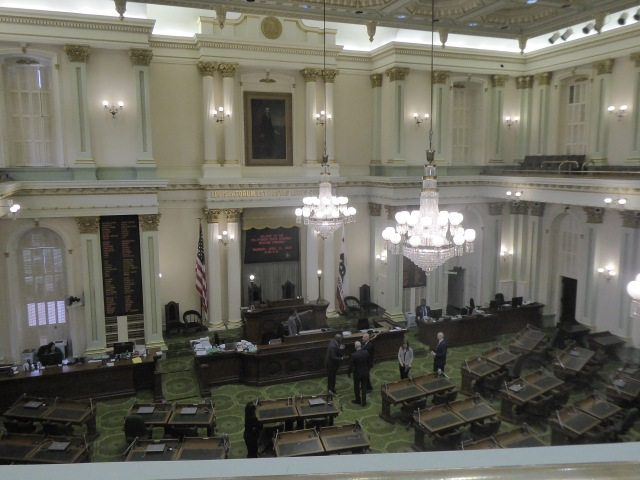 Finished with the tour and it being lunch time, we returned to the basement and its new food service addition, the Eatery of the Statehouse at the Capitol.  With a varied menu of freshly prepared items (the burgers looked really good) we opted to split a turkey club on honey wheat and then had to stand at a counter to eat it as the small dining room adjacent to the servery was fully packed.

We left the Capitol and walked down the mall back to the river, traversing Old Sacramento to get to our next stop of the day, one that would take the entire afternoon, the California State Railroad Museum.

Looking Down to the River

We would spend an exhausting afternoon here and still not cover all of the exhibits.  And those we did were not in a depth that did them justice.

This museum is not necessarily about the history of railroads but more about their impact on California and how they helped to spur the growth of this vibrant state.

One of the first exhibits documents the historic moment on May 20, 1869 when a line from the east met a line from the west to complete the first transcontinental railroad, a ceremony that included the Golden Spike, which was hidden from public view until 2005 when the Museum acquired it 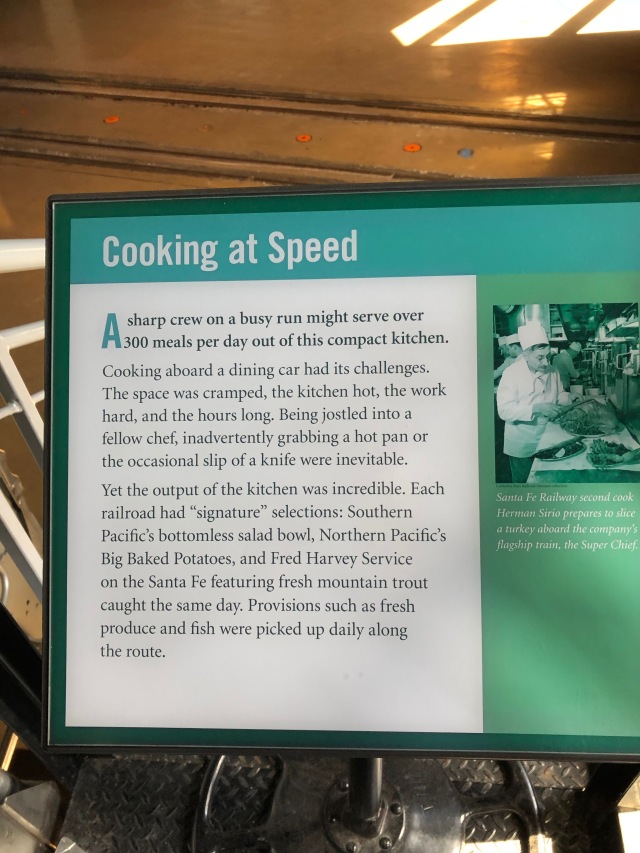 The car was built for the Santa Fe Super Chief, judged by many to offer the ultimate in fine dining, the first in a long line of lightweight Santa Fe dining cars which were the pride of the line, noted for custom menus and fine quality meals prepared by trained chefs.

Kitchen in a Dining Car

All of the cars for this new Santa Fe train were named for Southwest Indian pueblos or tribes: Isleta, Laguna, Acoma.  A meal in the Cochiti was a gourmet experience; presiding over the cuisine was 51-year old Peter Tausch, a trusted steward trained in the tradition of Fred Harvey to provide fine dining service aboard Santa Fe dining cars. 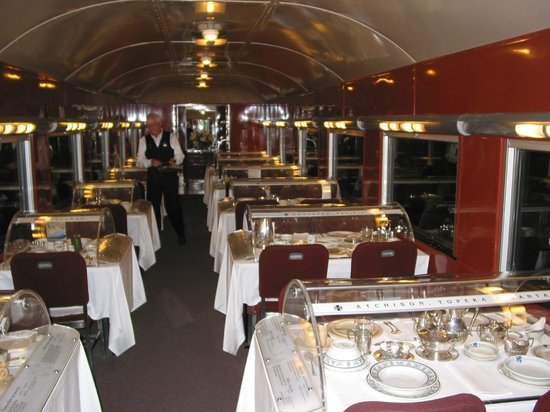 On the Super Chief’s maiden run on May 18, 1937, the menu included sirloin steak for two for $2.75, Swordfish Steak Sauté for 75 cents, Poached Tranche of Salmon for 70 cents, and Old Fashion Boneless Chicken Pie for 85 cents.

As we worked our way to the end of our visit, we stopped at large section devoted to the many scales of model Railroads one could acquire (Z, N, HO, S, O, G) that included a large layout with a couple of fully assembled trains running on the tracks. 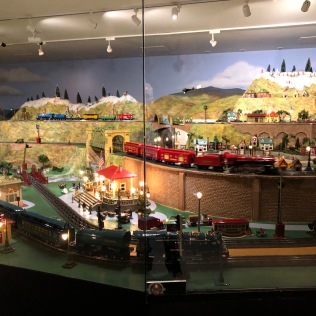 Exhausted by now, we took a Lyft back to the apartment where we spent an hour or so with an adult beverage helping to revive us before we departed for dinner at Der Biergarten on the east side of downtown.

We grabbed seats at one of the outdoor picnic tables and ordered our first round, a Hofbrau House Helles Lager for me and Dunkel for Joanna.

For food, we selected a currywurst, cucumber salad, and a pork schnitzel with German potato salad.    All of it was good, genuinely German in taste and presentation and it provided us with a nice finish to what had been two very full days.

Once again, we’d used the three-day break in between two four-day weekends with Jessica and Kris to good advantage, this time re-connecting with a good friend, taking a field trip to our state government, riding the rails and finally, eating some really good mini-donuts.  Not sure what the highlight was, but another order of those round pastries sounds real good right now. 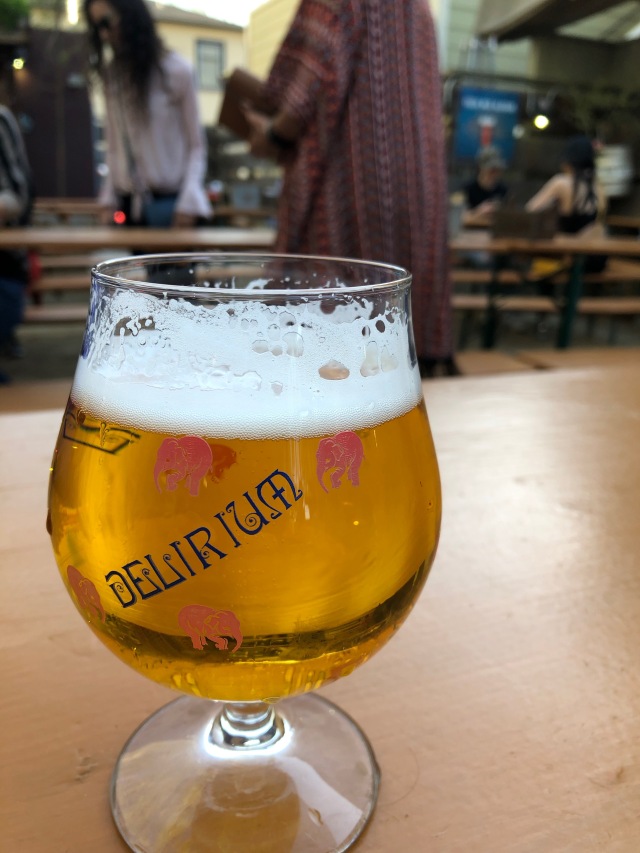 Statehouse at the Capitol: http://statehouserestaurant.com/