We spent the next few days at home preparing for what would now be an extended period of time away, traveling for a little over a month to North Carolina, Egypt, and then Mexico.  But first we’d take off for over a week and  meet up with Adventure Cycling to participate

We left on Friday and drove straight through to our lodging for the next two nights, the Tucson Lazy Days KOA located not too far outside of downtown.  It’s a nice resort style park, somewhat pricy for tent camping at forty odd dollars a night but with nice amenities.  After setting up camp we drove to a Barrio Brewing for beer and dinner to jump start our week, par for the course for us.

Our Site at the KOA

A longtime fixture in Tucson, we would find their products broadly distributed as we traveled throughout the southern part of the state, and after sampling their Citrazona IPA, it is easy to see why, a smooth drinking 7% IPA with a tangerine finish, right up my flavor profile.  Joanna would order the Southwest Eggroll and I the Cheeseburger and both were quite good.  The eggrolls were lightly fried with a filling of chicken, black beans, onion and spices and my burger, while just a burger, held together the whole way through, not falling apart as I ate it, the mark to me of a good sandwich.

We hit happy hour pricing on the beers at $4.25 apiece and we walked out having consumed three with a total tab of $36 dollars including tip, not a bad way to start the trip.  The next day we met up with, Mike, an acquaintance from my high school days who I had reconnected with at our 50th reunion back in August.  We drove over to his house just north of Saguaro National Park East where we met his wife Bonnie and further caught up on their lives since high school. 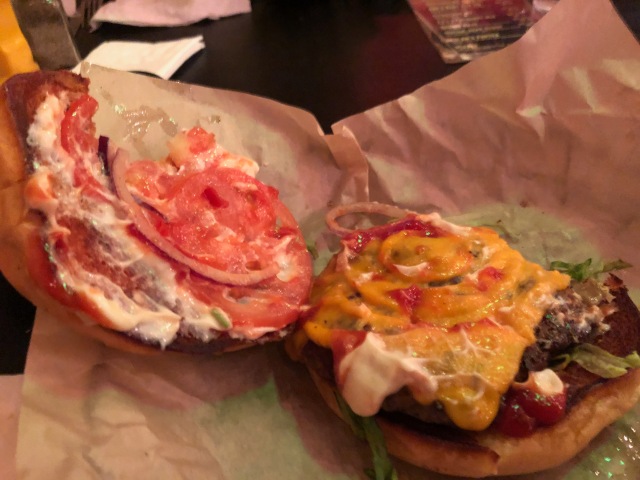 Leaving Bonnie, Joanna, Mike, and I drove to the Gregory School for the 13th annual Tucson Classics Car Show.  Presented by the Rotary Club of Tucson, this event donates nearly 1.5 million dollars annually to local charities and features over 400 high quality Classic Cars and Hot Rods. 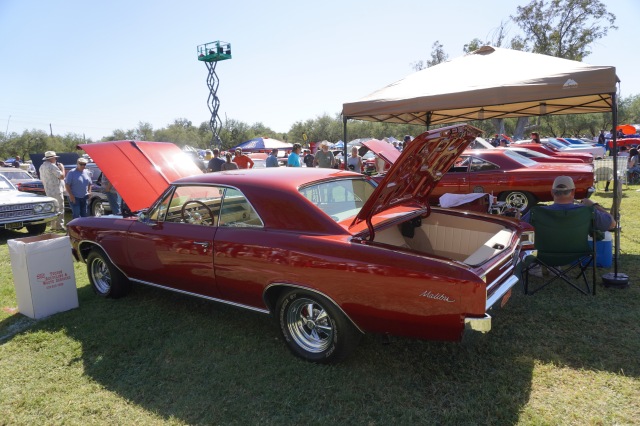 We spent 2-3 hours checking out the vehicles, including a 1966 Chevrolet Malibu like the one I owned as a senior in high school and a bevy of muscle cars including Cobra’s, Mustangs and Camaros. We then drove to 4th Avenue near downtown and the Pie Allen district to walk up and down the blocks, checking out the attractions of this newly hip neighborhood, including the Boxyard, a unique dining and social area constructed around shipping containers. 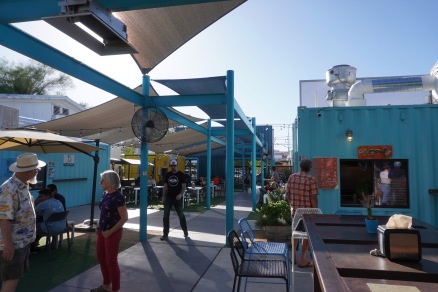 From there we walked up the street to Irene’s Holy Donuts for a quick snack, enjoying one of the large round intriguingly flavored concoctions.

From there, it was on to the Philabum Glass Gallery, home to the internationally known glass artist Tom Philabum who recently retired.  Landing in Tucson in 1974 armed with an MFA in ceramics and another in glass, he had studied glassblowing with the renowned artist and teacher Harvey Littleton at the University of Wisconsin in Madison.  During the ensuing decades he would produce numerous collectable pieces and mentor a new generation of glass artists.

We chatted with the knowledgeable staff member there and then set out for a drive up the Mt. Lemon Scenic Byway to a turnout with great views of the hillsides of Saguaro National Park and Tucson in the distance.  We spent time watching the sun set and eavesdropped on a couple participating in a engagement photo shoot, as they endlessly posed with the view in the background.

We descended to Mike’s house to pick up Bonnie and head out for dinner, not far from the KOA, at their favorite Mexican restaurant Karichimaka.  Family owned since 1949, this unpretentious spot serves up traditional fare at reasonable prices.  Joanna enjoyed a Gordita and I the Chile relleno & ground beef taco combo, with no complaints about either, not the best we’d ever had but certainly not the worst. 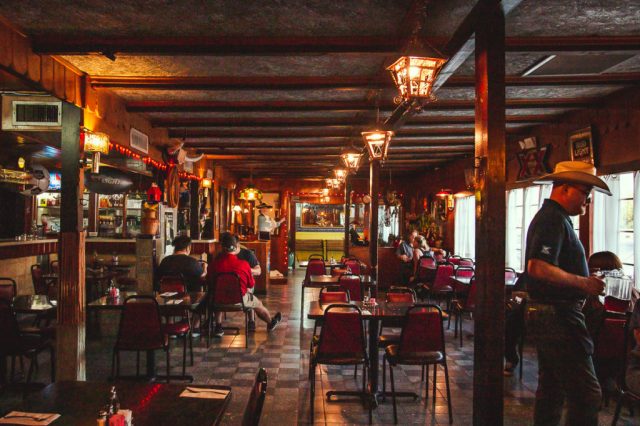 And with that our day was done.  We returned to the KOA with all of Sunday ahead of us as we waited to meet up with the tour there at 4:00pm.  To kill time, we drove into downtown to meet Mike at the Hotel Congress for some music performed by a well-known local guitarist who usually performs with a home-grown Gypsy Jazz group. 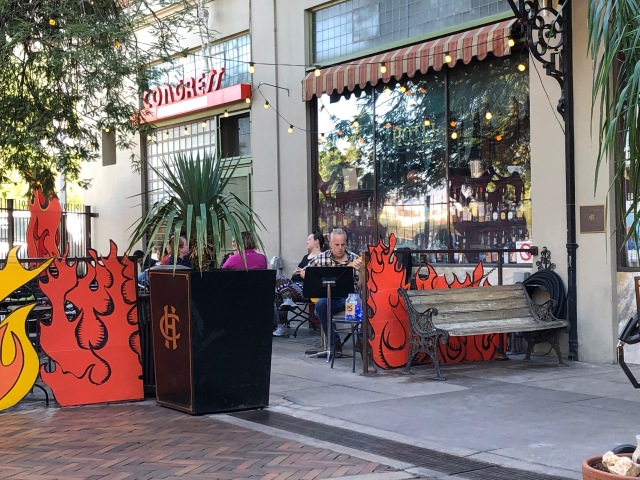 Music on the Patio

The hotel, added to the National Historic Register in 2003, was built in 1918 and designed by the Los Angeles architectural firm William and Alexander Curlett as part of an expansion of Congress Street and in conjunction with the Rialto Theatre, which sits just north.  The rear of the building faces the historic Amtrak Southern Pacific train station, built by Southern Pacific in 1907.

The Congress is also known for being the site of the capture of gangster John Dillinger in 1934.  After a series of bank robberies, the Dillinger Gang arrived in Tucson to hide out, but on January 22, 1934 a fire started in the basement and spread up to the third floor where the gang resided under aliases. 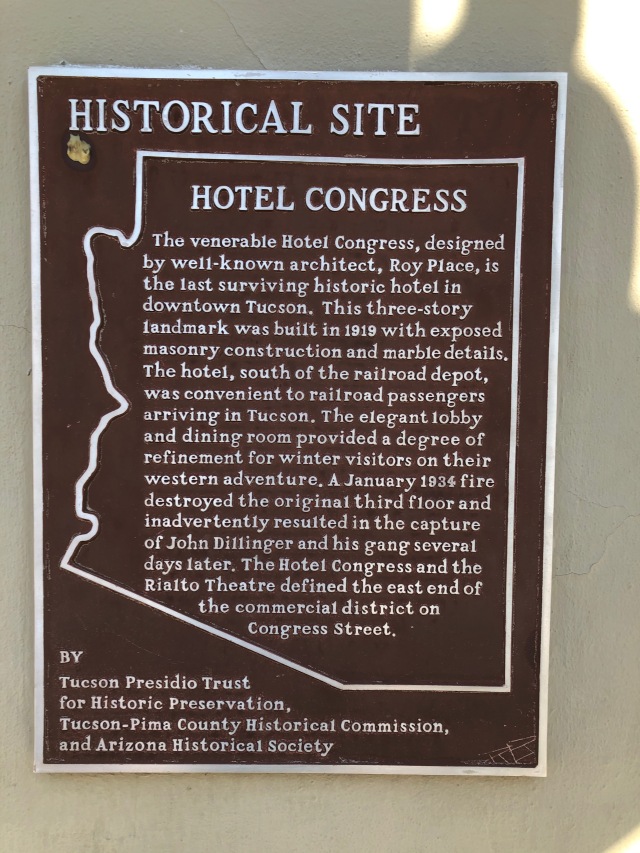 After the desk clerk contacted them through the switchboard the gang escaped by aerial ladders.  On the request of the gang, two firemen retrieved their luggage, identifying who they were.  After being transferred to a jail in Crown Point, Indiana, Dillinger escaped again and was eventually shot down in Chicago, Illinois.

We sat on the outdoor patio enjoying a build your own Bloody Mary which we nursed through a couple of sets before saying a final farewell to Mike to head down to our last stop of the day and fitting finish to our stay in Tucson, at the Mission San Xavier del Bac (White Dove of the Desert).  It was founded in 1692 by Padre Eusebio Kino in the Center of the Tohono O’odham Nation San Xavier Indian Reservation along the banks of the Santa Cruz River.

The mission was named for Francis Xavier, a Christian missionary and co-founder of the Society of Jesus (Jesuit Order) in Europe.  The original church was built to the north of the present Franciscan church, but was razed during an Apache raid in 1770.  The mission that survives today was built between 1783 and 1797, making it the oldest European structure in Arizona.

Unlike the other Spanish missions in Arizona, San Xavier is still actively run by Franciscans, and continues to serve the native community by which it was built.  Widely considered to be the finest example of Spanish Colonial architecture in the United States, the Mission hosts some 200,000 visitors each year.

We returned to the KOA to await the arrival of our Adventure Cycling group, eager to see who we’d be riding with and how the tour would play out, this being our first exposure to a Van Supported one (we’d done two Fully Supported tours in the past).  Our brief stay in Tucson had been full of fun and activities and we fully appreciated the opportunity to get to know Mike better, having not known each other that well in High School.  We were ready to ride.

Setting Sun from the Lookout